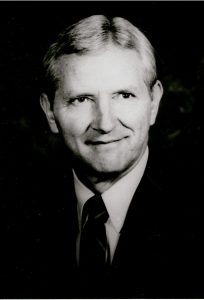 Surrounded by his family, Tom White peacefully passed away in his home on June 27, 2019. With his brilliant mind, caring nature and gentle soul, he was a source of strength and role model for us all. He was deeply loved and will be dearly missed.

Tom White was born November 12, 1927 on a farm near Cherokee. He was the youngest of six children born to Marion and Iva White.

He was preceded in death by one sister, Ruth Anne Immell, and four brothers – John, Louis, Jack and Merrill.

Tom was educated in the Cherokee school system, playing both football and basketball in high school. During this time he worked at various jobs – at a hatchery, as a shoe shiner, in a bakery, traveling with the wheat harvest from Oklahoma to North Dakota, as a lifeguard and operating farm plow machines. World War II started shortly after he entered high school and was still going on when he graduated in 1945.

After high school, Tom enlisted in the United States Navy and served in communications in the Pacific Theater in Hawaii until completing his enlistment two years later. After serving, he enrolled in college and graduated from the University of Oklahoma with a degree in Accounting in 1951. Immediately following graduation, he was employed by Southwestern Bell Telephone Company in Oklahoma City. In 1954, Tom became engaged to another Southwestern Bell employee, Evelyn Bushree, and they were married in August of that same year.

During his career with Southwestern Bell, Tom and his family experienced several intercity moves, as they lived for various periods in Oklahoma City (3 times), St. Louis (twice), Dallas and Tulsa. His last transfer brought him back to Oklahoma City in 1973 as Chief Accountant, a position he held until his retirement on December 31, 1990. He worked under contract for Southwestern Bell during 1991.

In 1992, Tom ended his short-lived retirement by accepting an accounting position with the Oklahoma Department of Education in the area of Federal Programs. He was responsible primarily for the Child Nutrition and Adult Education programs. He retired as Assistant State Superintendent in 2008.

No services are planned at this time. To share a memory or condolence, visit www.mercer-adams.com