During a special ceremony on Aug. 21 at the Great Salt Plains Stampede Rodeo Cherokee Mayor Karen Hawkins present Kelsie Chace a key to the city.

Chace is the daughter of Tom and Lisa Chace, Cherokee, and a graduate of Cherokee High School.

She began her rodeo career at the age of three in Cherokee competing in local playdays. Stick horse barrels, goat tail undecorating, and boot scramble were a few of her early events.

Kelsie worked her way through the junior rodeo ranks in the barrels, poles, goat tying and breakaway roping, winning numerous buckles, saddles, and other awards.

In high school, she focused on breakaway, team roping, and goat tying. She was the Oklahoma High School Rodeo state champion in the breakaway in 2007 and a 3-time national qualifier in the event.

This earned her a scholarship to Southwestern Oklahoma State University, where she qualified for the College National Finals 3 times in the breakaway. She also was a student assistant coach there for one year and assistant rodeo coach for two years after earning her bachelor and master degrees.

Kelsie now hangs her hat in Dublin, Texas where she is a professional cowgirl. She is a 7-time world champion, four in the breakaway, two in the tie down and 1 all-around title.

Recently she won on one of the biggest stages for breakaway roping, the WCRA major in Kansas City worth $50,000. At one time this year, she had more money won in the annual WPRA standings than the top barrel racer, which until this year was unheard of.

She is a strong ambassador for breakaway roping and is working on and hoping to compete at the National Finals Rodeo in that event in the near future.

Kelsie loves to give lessons and conduct clinics, teaching breakaway roping to those who want to work hard, follow their dreams and, like herself, make those dreams come true. 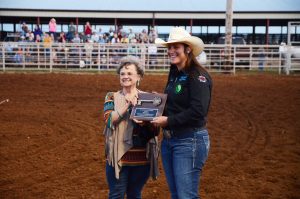