The Cherokee Main Street will have their annual awards banquet at 6 p.m. Sept. 28 at the Alfalfa County Fairgrounds in the Exhibit Building.

The evening will give Main Street a chance to recognize citizens who are deserving of awards, including Citizen of the Year, Community Spirit, Community Service and Lifetime Achievement Award. A new award added this year will recognize one Outstanding Educator.

They will also take time to recognize the new businesses in Cherokee.

A meal will be catered by Farmers Table. Tickets are $15 or a table that seats eight people can be purchased for $115.

The main speaker for the evening will be Jason Paris, educator at Cherokee High School.

For his work in education, he has been recognized as a diamond coach by the National Speech and Debate Association, the Oklahoma Alliance for Arts Education Outstanding Drama Teacher, the Charlene Burton Coaching Award Recipient, the OSSAA 3A Speech and Debate Coach of the Year, and the OSTCA Young Speech Teacher of the Year. He has coached over 50 individual All-State award winners, five NSDA National Octa-Finalists, and one national champion.

A graduate of Northwestern Oklahoma State University and New York University, Paris holds a Masters Degree in Theatre. Three of his original plays have been produced in New York, including Locker Room Talk, which won the 2017 Midtown International Theatre Festival, and for which his former student Avery Bagenstos won Best Actor.

Paris has served in various capacities at Cherokee High School since 2002, and despite having graduated from Alva High School, considers himself a proud Cherokee Chief. He currently sits on the OSSAA Speech & Debate Advisory Committee.

To reserve a table or for more information on the banquet contact Schaun Aker at 580-596-6111. 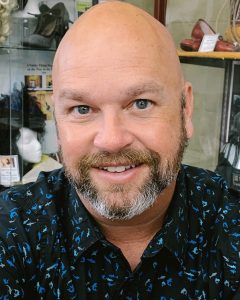