On what started out as a clear sunny day in September 2001 quickly changed after four planes were hijacked and crashed into three buildings and a field.

Sept. 11, 2001 is a day scarred in everybody’s memory as a day of the worst tragedy to hit American soil since the attack on Pearl Harbor in Hawaii.

On that Tuesday in September, the first hijacked plane, American Airlines Flight 11, took off from Boston enroute to Los Angeles with 92 people on board.

At 8:19 a.m. Flight 11 was hijacked and the Federal Aviation Administration was notified.

The third plane that was hijacked took off at 8:20 a.m. with 64 people on board. American Airlines 77 took off from Dulles International Airport enroute to Los Angeles.

At 8:46 a.m. time seemed to stop for those in the New York City area as Flight 11 hit the North Tower of the World Trade Center.

Within a minute, the New York City police and fire departments were dispatched to the North Tower to begin their rescue operations.

Four minutes after the plane hit the tower, President George Bush was notified while speaking to an elementary class in Florida.

Seventeen minutes after the first plane hit the North Tower, flight 175 hit the South Tower of the World Trade Center.

Five minutes later the FAA, for the first time in history, grounded all flights.

The attacks forced the White House and the U.S. Capitol to be evacuated as a precaution.

Just before 10 a.m. the South Tower gave way and collapsed.

Flight 93 was hijacked and headed towards the next target when the group of passengers banned together and attempted to take the plane back.

The hijackers intentionally crashed the plane in a field in Pennsylvania, killing all on board.

One hundred and two minutes after the first plane struck the North Tower, it collapsed.

Rescue crews from all over the country came in hordes to help with the rescue and clean-up of the towers.

Nineteen years later the images of the planes striking the towers, the Pentagon and the site of the wrecked plane are still on the minds of people who witnessed the attacks.

The COVID-19 pandemic saw the Oklahoma City event move to a virtual event only, with no in person climbing taking part.

After discussion, the decision was made to host their event at Gloss Mountain State Park and utilize the stairs that go up the mountain.

Around 7 a.m. Sept. 12, firefighters from Major and Alfalfa counties, Fairview Police Department and several of their family members embarked on their journey to the top of the mountain while a fairly large crowd encouraged them on their journey from below.

Early morning fog helped create a picturesque scene once firefighters made it the top of the mountain on the first of about seven total trips up and down.

The purpose was to remember those lost and to commit to “Never Forget.”

Talks are already in the works about possibly making the event a yearly one at Gloss Mountain State Park with the hopes the event would continue to grow each year. 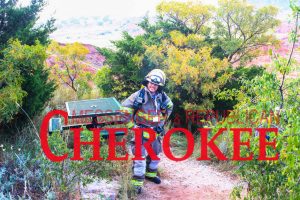