After calling the meeting to order and approving minutes of the Sept. 18 special meeting, members voted to convene into Executive Session at 7:00 for the purpose of interviewing and/or discussing employment, renewal, nonrenewal, appointment, promotion, demotion, discipline, resignations and salaries of certified and noncertified personnel for the 2020-21 school year.

At 7:57, members approved a motion to return to Open Session. Once in Open Session, members voted to accept the resignation of custodian/maintenance worker Kama Walcott.

A motion was then heard dealing with the possible change of the payroll period for hourly and route employees. The proposed change deals primarily with employees who receive their check via direct deposit.

The change will move the payment period about five days and was approved as presented.

Lengthy discussion then followed on an agenda item dealing with the upcoming 2020-21 basketball season.

Superintendent Barry Nault told board members he attended a meeting with other school district representatives and OSSAA officials Oct. 6 in Fairview.

Purpose of the meeting to try to explore ideas with schools present and OSSAA in regards to the upcoming season.

Mr. Nault told board members at this time OSSAA as an organization has not issued any guidance and it appears they will leave the decision up to local school districts much like has been the case with fastpitch softball and football.

Superintendent Nault did tell board members the Aline-Cleo school district has purchased body temperature scanners that will read automatically read the body temperatures of persons entering the school buildings.

Other possible scenarios discussed at the meeting with other schools is mandatory face mask use  by persons attending games.

The possibility of having teams arrive to game always dressed to take to the court with the exception of changing shoes to eliminate individuals entering locker rooms was also discussed.

Mr. Nault stated all schools present are filling out questionnaire sheets and a general consensus on how to proceed with the season will be determined by the questionnaire results. Board members gave their approval for Mr. Nault to proceed based on the recommendations made by the other school districts.

Kristy Schroeder was then approved as concession stand manager for the 2020-21 school year at a rate of $3,000 for the season.

Under the Superintendent’s Report Mr. Nault told board members the new bleachers at the elementary gym are now installed. Based on the current progress, Mr. Nault stated the high school addition now looks like it might be finished in November instead of December as initially projected.

He told board member touchless water faucets have now been installed and Chromebooks have arrived for the elementary.

A water line at the elementary has been repaired after the removal of trees.

The new bus barn at the high school building in Aline is nearing completion and digital signs have been installed along the road at both school locations in Aline and Cleo Springs.

With local COVID-19 cases continuing to trend upwards Mr. Nault said the decision was made to move to Virtual Parent/Teacher conferences this year.

Though slated for 6 p.m. Oct. 29, the status of Meet The Cougars is still pending and may be limited to a virtual only event this year.

After further discussion on items the meeting adjourned. Next meeting is slated for 6 p.m. Nov. 4.

A special meeting of the Aline-Cleo School Board was held Sept. 18, for the purpose of accepting and taking action on the sale of bonds for the district, as well as discussion a few other routine items.

Smith made mention of the fact that interest rates on bond were around 1.5 percent at the beginning of the year prior to the pandemic hitting. For a short period of time after, he stated rates nearly tripled before finally coming back down.

In the recent bond sales around the state, Smith stated many school districts received rates averaging to as low as one percent.

Smith then told the board Aline-Cleo received three bids for the bond sales, with two of the bids being received from local banks.

The three bids Aline-Cleo received were submitted by:

After reviewing bids, board members voted to award the bid to Cleo State Bank.

Approval followed on a couple more items related to the bond bids before members voted to approve the Estimate of Needs for the 2020-21 school year.

General Fund Encumbrances 87-89 in the amount of $14,166.95 were approved. It was noted most of the money is being used to purchase needed Chromebooks.

With no additional items to come before the board, the meeting adjourned at 12:14. 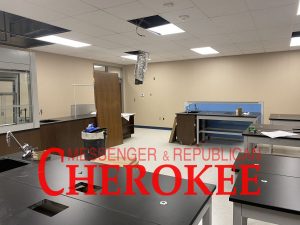