Homecoming week is taking place at Cherokee Public Schools.
The themes for each day are as follows:
• Monday: Thriftshop, wear mismatched clothes.
• Tuesday: Feelin Groovy, wear tie dye.
• Wednesday: Let’s Get Physical, wear 80s clothes.
• Thursday: The Lazy Song, wear pajamas.
• Friday: Our House, wear Cherokee Chief clothing.
Also, at 2 p.m. Friday there will be a parade, followed by a homecoming pep rally at the football field at 3:30 p.m. At 7 p.m. there will a bonfire pep rally beside the administration building.
Coronation will take place at 6:30 p.m. on Friday and the game will kick-off at 7 p.m. against Kremlin-Hillsdale Friday.
The candidates for homecoming are as follows:
• Kacie Eshleman. She is the daughter of Troy and Christina Eshleman. Kacie is involved in basketball, one-act, speech, FFA, FCCLA and FCA.
Her honors include State Champion One-Act 2019, All-State One-Act 2019, District Champion Basketball 2018, superintendent’s honor roll and Bronze Medallion at Oklahoma Youth Expo 2018.
When asked why she should be homecoming queen, Kacie said, “Well, why shouldn’t I be?”
• Laynie Golden. She is the daughter of Joshua and Jennifer Golden. Laynie is involved in cheer, softball, track, FCCLA and FCA.
Her honors include softball all-conference, superintendent’s honor roll and two-time softball all-conference honorable mention.
When asked why she should be homecoming queen, Laynie said, “Umm, I don’t know, but it’d be pretty cool.”
• Macy Goodwin. She is the daughter of Roger and Karla Goodwin. Macy is involved in FCCLA, track, basketball, cross country and FCA.
Her honors include third place at state cross country, district champion in basketball 2018 and state runner-up two mile relay.
When asked why she should be homecoming queen, Macy said, “MMM, because why not?”
• Ruston James. He is the son of Cynthia Passwater and Robert Hudson. Ruston is involved in FFA, FCCLA, football, basketball and baseball.
His honors include 2019 District B-2 champions, 2019 State Football Semi-finalist, 2020 State Basketball Academic Champion and 2018, 2019 and 2020 basketball district champions.
When asked why he should be homecoming king, Ruston said, “Umm… I ok. I like long walks on the beach with my dog, Cleetus.”
• Damein Lobato. He is the son of Kyle and Kathleen Roglin. Lobato is involved in football and track.
His honors include 2019 State Football Semi-Finalist.
When asked why he should be homecoming king, Lobato said, “mm…Because I play football.”
• Charlten Smith. He is the son of Charles and Lorrie Smith. Charlten is involved in football, track, FFA and FCCLA.
His honors include 2019 State Football Semi-Finalist, 2019 First Team Offensive Lineman and 2019 District Football Champions.
When asked why he should be homecoming king, Charlten said, “I don’t know. I play football.”
The flower girl for homecoming is Paizlee Waugh. She is the daugther of Braden Waugh and Kelia Waugh.
Paizlee enjoys playing outside, riding Dolly, tumbling and watching television.
When she grows up she wants to be a rodeo queen.
Paizlee’s favorite part of school is playing with her friends and school work.
The crown bearer is Turner Allison. He is the son of Nicole Allison and the late TJ Allison.
Turner enjoys playing football, fishing, playing with his cousins and going to the Jiffy Trip.
When he grows up he wants to be a bull rider like his Uncles Kyle and Clay.
Turner’s favorite part of school is playing at recess with his friends and learning. 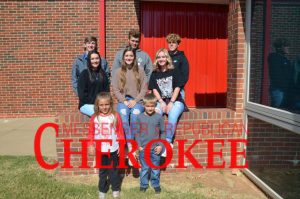