“I am very humbled and honored,” Timberlake Head Football Coach Brian Severin said in an interview after the naming of the stadium in his honor.

Prior to the football game on Oct. 9, Timberlake High School recognized the 1980 state runner-up, which included Severin as a player.

Following recognizing the 1980 team, the school surprised long-time head coach with a stadium dedication in his honor.

The field already bears the name of Ray Troutt Field, and it will remain, and now the stadium will henceforth be known as Brian Severin Stadium.

Following a recent bond issue, the school was able to upgrade the stands and build new bathroom and concession stands.

According to Timberlake Superintendent Kale Pierce, the naming of the stadium was something the school had discussed for about a year. Conversations became more serious and official as construction progressed.

In a statement read aloud the following was said, “The Timberlake community has always placed a high value on loyalty and dedication. No one exemplifies these two things more than Coach Severin.”

Severin, who is in his 27th season as head coach plus four years as an assistant, will coach his 304th career game. All of those games have come as a Timberlake Tiger.

Coach Severin’s first four years as an assistant came in the final years of Helena-Goltry and first year of Timberlake.

“More important than his on the field accomplishments, Coach Severin has had a lasting impact on generations of young men from the Timberlake community as you can see tonight. For his loyalty, dedication, and impact on the community, the Timberlake administration and school board have decided unanimously that this beautiful new facility should bear Coach Severin’s name,” the statement said.

Pierce said, “Coach Severin has obviously led a successful program, but his loyalty and dedication to Timberlake, along with the huge impact he has had on so many young men that have come through his program are the primary reasons that he’s so deserving of this honor.”

The banner is currently temporary, but will be replaced with a permanent sign.  The school is hoping it can be installed before senior night this Friday, but it may be next week. They will be installed prior to upcoming home playoff games.

“I have been blessed above all measures by the athletes, students, school board, administration, parents and assistant coaches,” Severin said. “Because of them, this has been an easy job. It is great to coach at a school who loves football like Timberlake.”

Pierce added, “It was great to see so many former players and co-workers show up to support Coach Severin. There were so many more that wished they could make it, including several that were coaches or administrators that had to miss due to their games. It really shows the impact that Coach Severin has had on so many. It was also a little shocking to see that secrets can actually be kept in small town Oklahoma. Coach Severin may have been the only one that was unaware of what was going on.” 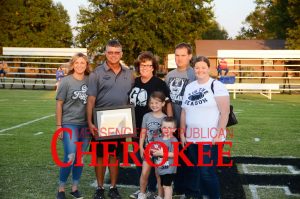 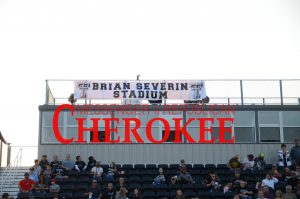 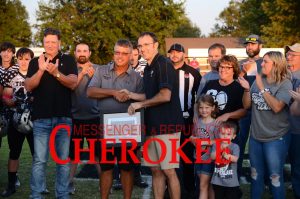