Voters will go to the polls Tuesday for the November 3, General Election, Alfalfa County Election Board Secretary Kelly Stein said.

Please keep the following information and tips in mind as the election approaches.

• Polls are open from 7 a.m. to 7 p.m. Tuesday. Lines are possible at peak voting times. Wait times will likely be shortest at mid-morning and mid-afternoon. Anyone in line to vote at 7 p.m. will be allowed to cast a ballot.

• Anyone who needs to look up their polling place, verify their registration information, or view a sample ballot can do so online. The Online Voter Tool can be accessed on the Oklahoma State Election Board’s website: www.elections.ok.gov. Those who vote by mail can also check the status of their ballot using the Online Voter Tool. Sample ballots are also available at the County Election Board office.

• Oklahoma law requires every voter who votes in person at the precinct polling place or during early voting at the County Election Board to show proof of identity before receiving a ballot. There are three ways for voters to prove their identity under the law (only one proof of identity is required): Show a valid photo ID issued by federal, state, or tribal government; or show the free voter identification card issued to every voter by the County Election Board; or sign an affidavit and vote a provisional ballot. (If the information on the affidavit matches official voter registration records, the ballot will be counted after Election Day.)

• Physically disabled voters who cannot enter the polling place, need help marking their ballots, blind or visually disabled voters and illiterate voters may be assisted by a person the voter chooses. In all cases, a person providing such assistance may not be the voter’s employer or an agent of the employer or an officer or agent of the voter’s union. A person providing assistance also must swear or affirm that the voter’s ballots will be marked in accordance with the voter’s wishes. Alternatively, all blind, visually impaired, and physically disabled voters in Alfalfa County may use the audio-tactile interface (ATI), a feature offered on all Oklahoma voting devices, to vote privately and independently, either at Alfalfa County Election Board during early voting or at their assigned polling place on election day.

• Any violation of election law will be reported to the proper law enforcement authorities. Electioneering is not allowed within 300 feet of a ballot box. This includes but is not limited to hats, clothing, facemasks, signs, etc.  It is also unlawful to remove a ballot from the polling location, possess intoxicating liquors within half a mile of a polling place or to disclose how you voted while within the election enclosure. 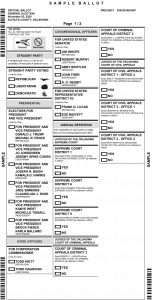 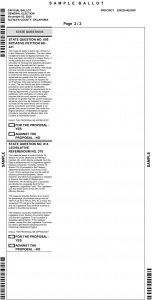