Burlington High School is set to crown their homecoming royalty this Friday prior to their basketball game.

The royalty is as follows:

• Savannah Granados. She is the daughter of Joe and Tracy Granados. Savannah is involved in basketball, stuco, FFA, FCA, band/vocal and track.

When asked why she should be homecoming queen, Savannah said, “I would be honored to serve as homecoming queen because I’m a great leader in my class, on the basketball team and within the school. I truly love being a Lady Elk and it would be an honor to represent Burlington as the 2020 homecoming queen.”

• Karlie Heatherman. She is the daughter of Eric and Jennifer Heatherman. Karlie is involved in FFA, FCA, stuco, band, vocal, track and cross country.

When asked why she should be homecoming queen, Karlie said, “It would be a good opportunity for me to represent all students in extracurricular activities and sports.”

• Kayli Stewart. She is the daughter of Kelly and Jennifer Stewart. Kayli’s honors include FFA, FCA, stuco, band, vocal, track and junior-senior play.

• Alyssa Russell. She is the daughter of Brenda and Rodney Mustard. Russell is involved in FFA, FCA, stuco and music.

When asked why she should be homecoming queen, Russell said, “This is something I want to experience during high school. A chance like this will never come to me again.”

When asked why he should be homecoming king, Paden said, “I want the girl I am escorting to be the queen.”

• Caleb Cox. He is the son of Shane and Tonya Morgan. Cox is involved in FFA, FCA, basketball, band and vocal.

When asked why he should be homecoming king, Cox said, “Because it’s my senior year and I think it would be fun.”

• Preston Paschall. He is the son of Elisha Downing and Brandon Paschall. Preston’s involved in basketball, track and FCA.

When asked why he should be homecoming king, Preston said, “I mean, might as well.”

• Kade Wright. He is the son of Kristin. Wright’s involved in basketball, FCA, football freshman and sophomore year, track freshman year and vocal.

His honor include superintendent’s honor roll.

The flower girl for the evening is Stella German. She is the daughter of Austin and Julie German.

Stella enjoys playing with her toys, her kitties and listening to music.

When she grows up, she wants to be a teacher.

Stella’s favorite part of school is playing with her friends.

The crown bearer is Jase Downing. He is the son of Ross and Elisha Downing.

Jase enjoys playing Xbox with Preston and Ashlynn and playing outside with mommy, daddy and Karter.

When he grows up he wants to be an Army man. 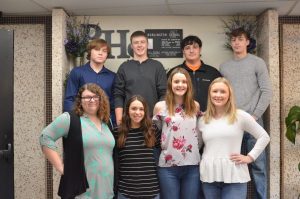 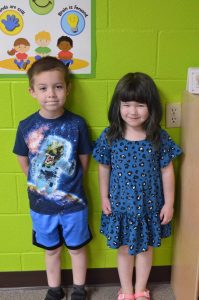 Northwestern honors employees for years of service to university

Carmen to host parade with Santa through town

Senator Pederson sworn in at Capitol