Fire departments in Major and Alfalfa counties received an unexpected boost recently, thanks to donations from the Anne Holmes-Parker Foundation, and Anne’s daughter, Susan Parker.

Additional donations were given to fire departments in Amorita-Byron, Helena, Ames and Jet.

Donations from the foundation to Cleo Springs, Ringwood, Meno and Aline were personally matched by Susan as well.

During the check presentation Susan stated, “I know with COVID-19 going on this year, many of your departments weren’t able to host your traditional fundraisers and it’s our hope this donation will help ease some of financial impact from lost donations.”

She continued by saying, “Please use these funds for training, radio/equipment purchases or for any need your department may have.”

Ann Holmes-Parker, whom the foundation is named after, lived in Cleo Springs for many years.

While living in Cleo she spent her time volunteering for many charities and organizations.

She was instrumental in the super two lane from Cleo to Ringwood then the four lane to Enid. As well as the Gloss Mountain signage.

While living in Cleo she owned and operated Parker Insurance Agency, as well as serving many years as Chamber of Commerce President.

To which those duties included planning and organizing Labor Day Watermelon Festival. It was not uncommon for Ann to have had many political figures come through the parade over the years Including Governor George Nigh

“My mother believed in making a difference in the community. She was not afraid to rock the boat to better her community and education for all children“ says her daughter Susan.

She continued,“ I am very proud of her and her continued passion to make a difference to this day” 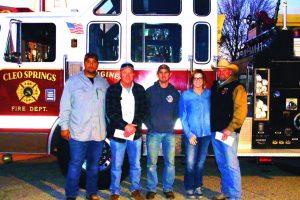