After years of service to AEC, Manager of Operations & Engineering, Jim Daub is retiring. Jim has given a significant portion of his life to Alfalfa Electric Cooperative members.

“With over 42 years of service to AEC and our members, Jim has been instrumental to the success of the cooperative,” said CEO and General Manager Greg Goetz. “Jim has spent many long days and nights working to serve the needs of our members and has a book of stories to tell. It has been a privilege to work with Jim, and I wish him the best in retirement.”

Jim was born in Newton, Kansas, to Sonny and Donna Daub. He moved to Wakita, when he was a freshman and later graduated from Wakita High School. With the encouragement of former Director of Operations Ron Shaffer, Jim began working for AEC as a groundman in 1978. In less than two years, he was an apprentice lineman. Jim became the Superintendent of Construction in 1997. Twelve years later, he was AEC’s Director of Operations. Since 2016, Jim has been the Manager of Engineering and Operations. Out of curiosity, Jim looked into a few other jobs during those 42 years, but nothing drew him away from AEC.

Jim married his high school sweetheart, Pat, and they raised three daughters, Abby, Tricia, and Molly. Jim and Pat have a dozen grandkids. Being present at the grandkids’ events is important to Jim, and he and Pat have attended many. Pat and Jim have also enjoyed traveling when time allowed.

AEC should thank Sonny for Jim’s work ethic. He inspired Jim by his example of how to work hard and live life to the fullest. At AEC, Jim did work hard and was proud to be a part of the Hazelton, KS substation project. He labored over the idea of separating the double circuit on the Hazelton substation and then building a backfeed from the Winchester, KS substation to the Hazelton substation. AEC completed this project in 2019. The design took over a year to complete; however, it solved many issues that caused the loss of service for Kansas members. Improving the service for AEC members is and always will be vital to the co-op.

When asked if he had any advice for the person taking over his position, Jim grinned. After some thought, he replied, “Be flexible with the plans for the day. Be patient – something I struggle with every day – with the people you work with. Remember, you are here to serve the members.”

One thing Jim won’t miss when he enters retirement is working the storms. As a younger employee, he looked forward to working through the storms and trying to get service restored in the quickest and safest ways. There won’t be too many things Jim won’t miss. He loves his job. He loves AEC. “The closer I get to retirement, the more blessed I know I am to be able to retire. But it’s still a hard thing to face.”

So, what are the plans for retirement? Although they have wanted to visit Alaska, that plan will have to wait as they hope COVID will soon be under control. Until then, Pat and Jim plan to play golf and ride motorcycles together during the warmer months. They will enjoy watching the grandkids at sporting events throughout the year. Reading is something Jim loves to do, so he will probably spend more time with a good book. He will continue to watch and feed the birds in his back yard – they will appreciate more attention. His OSU Cowboys and OKC Thunder will receive a bit more interest, too, during his retirement.

As we discussed his future retirement, the talk turned to how technology has changed the co-op world since Jim began working in 1978. For Jim, the most significant change was going away from the paper staking maps. Jim worked from his paper mapping bible until just a few years ago. He was not receptive to the big screen in his office or the digital wall in the dispatch room. His trust was in his mapping bible and the green pegboard that showed the AEC service territory. In a short time, however, the new technology won him over. Jim now enjoys the advantages of AEC’s technology. He works daily on an iPad and appreciates the GPS on the trucks. This equipment makes it much faster to dispatch crews during storms and keeps our linemen safer when backfeeding during outages.

When Jim began working for AEC, there was only 1 bucket truck – now the co-op has 10. “The trucks are bigger and better. The new technology is better in a lot of ways. I didn’t always like the changes, but I learned to use it. Our outage response times are much shorter because we know where to go to fix it. We no longer have to check each piece of equipment as we drive down the roads trying to find the problem.”

Although Jim’s retirement has been planned for many months, it is arriving much sooner than most thought. This past June, when AEC moved into the new building, Jim had a rough time leaving that building for the last time. “I think it will be easier to leave this building because there aren’t as many memories here.” Jim described his retirement as an abrupt disconnect…gotta love this guy and his sense of humor. On December 31, when Jim’s final day of working at AEC is over, he said, “I am going to miss the people I have worked with the most. I can’t even imagine working anywhere else.” AEC will miss you too, Jim – can’t imagine AEC without Jim Daub. Enjoy your retirement. You have earned it. 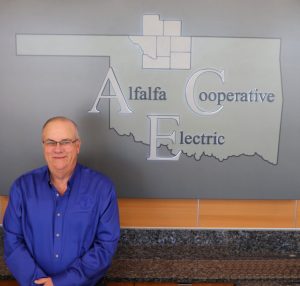