Glen spent his youth growing up in Colorado. Upon graduating from High School in Kim, Colorado in 1958, he became employed by a local rancher/businessman.

During a cross country trip to Kansas City in the spring of 1961, Glen and his employer flew into the Alva airport. Elva Lu Kinzie was handling the terminal and fuel sales that day. Every day that Elva Lu worked at the terminal, she always made sandwiches and took them out to sell to the pilots/passengers who flew in. Glen bought a sandwich. He would repeat often “that was the day he met the most beautiful girl in the world”. Glen would return to Alva and would marry Elva Lu on June 10, 1962.

He made Alva his home, enrolled at and graduated from NWOSU with a Bachelor of Science in Biology, and became employed at Kinzie Industries. Glen and Elva Lu were active in the community. This included being Wesley House sponsors at the college. They enjoyed working with the students.

Glen became a very skilled craftsman rebuilding airplanes and helicopters at Kinzie Ind., particularly in the structural and electrical areas. The aircraft he worked on were badly damaged or wrecked and had to be rebuilt from the ground up. His interest in aviation led him to acquire his airplane and helicopter pilot licenses. Glen’s attention to detail was important in getting these aircraft airworthy, particularly the helicopters. Glen would always insist that he be the first to fly every helicopter that he rebuilt.

In the late 1960’s, Glen was involved in the expansion of Kinzie Ind. into ag-spraying. He helped perfect the dry and wet equipment systems for ag spraying in the Hughes helicopters. He also worked on the development of the mobile truck nurse rigs for supplying the helicopters with fuel and spray chemicals. The mobile truck nurse rig made it possible for a helicopter to land on the truck, pilot stay in cockpit with helicopter running, get fueled and filled with chemical and take back off. This set up allowed the truck nurse rig to be on site at the field. This saved valuable time.

He also helped develop application techniques that Kinzie Ind. would use for their helicopter ag-spraying contracts for several years. Glen also operated one of the ag-spraying helicopter units that would go into Iowa to spray crops for Del Monte and Jolly Green Giant. Later he would manage spraying operations closer to Alva.

On May 30, 1970 Glen and Elva Lu welcomed their daughter Judy to their family. The following year, the great 1971 NW Oklahoma blizzard occurred. Glen was one of several pilots who flew helicopters daily for over a week to deliver food, supplies and personnel to stranded people in emergency situations.

Glen traveled to French Guiana in South America and Haiti in the Caribbean to assemble helicopters Kinzie had sold. He went to the International Helicopter Convention a few times to help promote goods and services for Kinzie Industries. Glen was hired a couple of times to use a helicopter to dry off race car tracks. In the late 70’s, Glen developed a business of repairing and refurbishing airplanes. Glen would rent out a couple of his rebuilt aircraft for local pilots to use. One adventure took him to Belize in Central America to pick up several damaged and wrecked aircraft he had purchased. This involved dismantling the aircraft on site and hauling them on his rigs all the way back to Alva.

Later Glen obtained his aircraft twin engine rating and flew for the Bouziden family. In all of his experience with Kinzie Ind., his personal and business interests, Glen amassed a large amount of flying hours. He also had an extensive resume in variety of aircraft flown. Glen was a conscientious, talented, and skilled pilot.

During the 1980’s Glen was an avid fisherman and would participate in several tournaments during the season. His favorite was striper fishing at Lake Texhoma. It was a must every year. Glen also enjoyed hunting, guns, and using/selling metal detectors.

Another favorite pastime was making stained glass windows and he even had a booth at Silver Dollar City. At one point the stain glass shop was in the back of the Family Fun Center, an arcade he owned across from the college. The college crowd enjoyed hanging out there and he enjoyed them. Glen shared his hobbies with his daughter Judy, building stained glass windows and making large clocks out of slices of cedar.

In 1989 Glen and Elva Lu went to work for Holiday Retirement Corporation as a management team in Austin, Texas. After several years, they became itinerant managers and travelled from facility to facility all over the U.S., training new managers for the company.

After granddaughter Shelby was born in 1999, Glen wanted to be closer, so he and Elva Lu moved back to Alva and managed the Homestead, which had recently opened. They retired from the Homestead in 2005 and moved to their retirement home in Aline.

Glen enjoyed his time in Aline and being a part of the community.

He filled his spare time being an Alfalfa County Reserve Deputy, working in his gun shop and spoiling his extra-large Black Labrador “Bentley”. Judy would jokingly tell Elva Lu that he treated Bentley better than he treated his own daughter. He enjoyed his grandchildren and taking in their events. He liked getting out his coin collection and viewing it with Shelby and shooting guns and tinkering in the gun shop with Paden.

Flying, fishing, family, and friends were four things that were dear to his heart.

Glen is survived by his wife Elva Lu (Kinzie), his daughter Judy and her husband Kelly Porter, and his two grandchildren Shelby Lynn and Paden Kole, of Cherokee, a sister-in-law, Pat Hasty of La Junta, CO, and a sister-in-law, Beverly Kinzie of Alva, and several nieces and nephews and a host of friends.

There are no plans for a service at this time, but we will live each day celebrating the wonderful life he lived. If there was one trait about Glen that always stood out, it was kindness. Always be kind.

Condolences may be made online at www.whartonfuneralchapel.com In Memory of Glen Hasty. 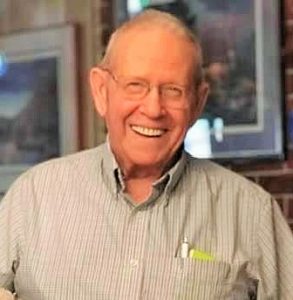