The Cherokee First Christian Church has recently hired a new youth minister to serve their church.

Derek Karl comes to Cherokee to serve in his first full-time ministry position.

Karl graduated from Breckenridge High School in Texas, then obtained an associate degree from Cisco College and finished up his education with a Bachelor of Divinity from Christian Leaders College.

Before coming to Cherokee, Karl and his wife were lay leaders in a church in north Texas for several years.

They have had the opportunity to work in children’s/youth ministries, in small groups, as well as in music ministries before coming to Cherokee.

“We understand the great responsibility and great privilege it is to be serving the Lord in a pastoral role. I am so thankful for my past mentors and for Pastor Luke Heim for guiding me in my new ministry position,” Karl said.

Karl had been working on his ministry studies for several years, and he knew he would be graduating this year.

So, he and his wife, Valarie had been praying about how and where God wanted them to serve Him. They looked into serving with Youth With A Mission. They even went so far as to contact a few of their local bases, but none of them seemed to be the right fit.

One day Derek saw the ad for Youth Minister position at First Christian Church in Cherokee. He remembers opening and reading the job posting and then going on to something else. A day went by, and suddenly he had a strange sense that he really needed to go back and look at the posting again.

Derek then told his wife to pray about it because he thought that God might be calling them to this ministry.

“I never imagined I would be in the small town of Cherokee, but I know God has great plans for us and for this community, and I am so excited to be a part of what He is working here.” Derek said.

Derek’s favorite part of ministry is getting to know people, to know their life story, and to hear the ways in which Jesus has transformed them.

He also likes to be an encourager for youth. When Derek was a teen, he often felt that if he didn’t live up to a certain standard, God could never love him. He struggled with legalism and thinking he had to live a perfect life. So, when he sees young people get discouraged by the battles they face, he views it as an opportunity to share his own shortcomings with them in order to encourage them in their faith.

He wants them to know that Christ loved them so much that He died for them, knowing they were still in their sin.

Derek worked for several years as a School Resource Officer, and has seen the pain and chaos the enemy has brought upon the youth. Many of the young people have never experienced the true love of an earthly father or mother, and his joy is to share the all-surpassing love of Jesus with them.

Currently Derek is looking to the Lord for guidance and direction and praying that he will be faithful in service to Him, knowing that this is His ministry.

Derek and Valerie come from the same town of Breckenridge, Texas and have been married for 25 years. They have six children.

“God has built our family through adoption, and we are multi-racial. You will know us when you see us. We sort of stand out, and that’s okay with us. God has called us to be different. More than anything, I hope that when you see us, you remember us not from the way we look, but from the love of Jesus that we show to others,” Derek said.

When asked what he would like people to know about him, Derek said, “I think I am a pretty simple guy. My father was born during the great depression and grew up during the war years. That time shaped him into being content and knowing that happiness does not come from material things. I think I get a lot of that from him.  On the lighter side, I really love telling silly “dad jokes” and playing pranks on my children. (It took me a few years of marriage to learn that it’s best to not play pranks on my wife!)” 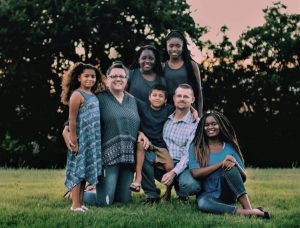