Cherokee High School is in the middle of their basketball homecoming week, which will conclude with the basketball games Friday night against Canton.

The theme for this year is, “‘Lettuce’ Whip the Tigers.”

The daily themes are also as follows:

Coronation will begin at 6 p.m. with the girls’ game starting at 6:30 p.m. and the boys’ game following.

There will be no homecoming dance this year due to COVID-19 restrictions.

The royalty are as follows:

• Jadin Hall. She is the daughter of Greg and Rita Hall.

When asked why she should be homecoming queen, Jadin said, “I would rather not be.”

• Bridget Wilhite. She is the daughter of Brian and Amber Wilhite.

• Gabriella Solis. She is the daughter of Franquy and Jose Solis.

Gabriella is involved in softball, basketball, FCCLA and FFA.

When asked why she should be homecoming queen, Gabriella said, “I think it would be great to win a crown. I would like to be that representative for Cherokee. I always dreamed to one day have the chance and be the homecoming queen.”

• Noah Leslie. He is the son of Amy Leslie and the late Jermiah Lazcano.

Noah is involved in basketball, baseball, golf, speech and debate and One-Act.

When asked why he should be homecoming king, Noah said, “Why should I be homecoming King? It would be a great honor to win, but I’d be happy if my buddies Ruston or Kannin won it instead.”

• Ruston James. He is the son of Cynthia Passwater-Hudson and Robert Hudson.

When asked why he should be homecoming king, James said, “It’s a good resume builder for taking girlfriend applications in college to further my knowledge of females.”

• Kannin Koehn. He is the son of Andrea Corr.

Koehn is involved in football, basketball, baseball, FCCLA and the academic team.

The flower girl for the evening is Adley Guffy. She is the daughter of Matt and Chelsey Guffy.

Adley’s hobbies are spending her free time singing, dancing or riding her hoverboard. She also enjoys playing with her brother and little sister.

When she grows up, she wants to be a princess. “A princess! Because I love princesses,” Adley said in her bio form.

Adley’s favorite part of school is getting to see Ms. Davis, playing with her friends and going to the gym with Coach Guffy (dad).

The crown bearer is Jantzyn Davis. He is the son of Jacob Davis and Candi Davis.

Jantzyn’s hobbies are jumping on the trampoline, drawing and coloring.

When he grows up, Jantzyn wants to be a police officer.

His favorite part of school is recess. 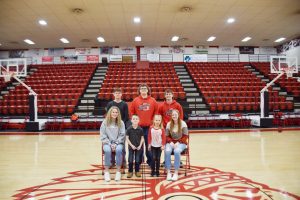