The Timberlake football team started their season with a 54-48 win over Covington-Douglas and continued their winning streak through the regular season, outscoring their opponents 599-102.

The Tigers advanced to the Class C playoffs and were two weeks off due to Covid-19 protocols from their opponents, who had to forfeit the game. In the quarterfinals they faced Waynoka and won 50-30 and then defeated Buffalo 38-12 to advance to the state championship game where the fell to Tyrone 21-42.

Following the post season, one player and a coach were honored with awards for Northwest Oklahoma.

The first award was for Northwest Oklahoma 8-Man Player of the Year and went to JJ Pippin.

Pippin rushed for 1,157 yards and 21 touchdowns, he also caught for 455 yards and five touchdowns. On the defensive side of the ball, he was among the team leaders in tackles.

The second award was for Northwest Oklahoma 8-Man Coach of the Year and it went to Brian Severin.

“I am very honored to receive this award.  Any time you are voted on by your peers it means a lot more.  Northwest Oklahoma has some really good coaches, so to be selected by them as Coach of the Year is really special to me,” Severin said.

“I have also been very blessed to coach in a community like Timberlake. I have always had great support and this community loves football. This makes coaching fun and rewarding when you have an atmosphere like this.” 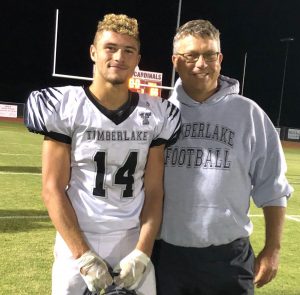