This is the first year Chace has joined this association. This year and next they are letting any winnings up to $10,000 from the WCRA (wcrarodeo.com) (World Champions Rodeo Alliance) count towards the IPRA so Chace decided to join.

Also, because of Covid and the cancellation of many rodeos she joined to just to be able to compete. She went to around five rodeos and then with her earnings through WCRA, she qualified for the IFR (International Finals Rodeo).

She won one of those rodeos and placed in the rest. The IFR was held for years in Tulsa and OKC (at the big house), but the last two years it has been in Guthrie at the Lazy E.

The finals consisted of four rounds and an average. Chace was third and fourth in a round and split first in the last round with a 1.9.

She got third in the average. She started the finals behind a little over a $1,000 and going into the last round was $70 ahead. With her win of the last round and average she ended up being the World Champion and the Rookie Champion by just over $3,400.

Chace was born and raised in Cherokee and graduated in 2009. She then went to college at Southwestern Oklahoma State University on a rodeo scholarship and earned a degree in interdisciplinary studies and a masters in sports management.  She served as assistant rodeo coach for two years at Southwestern Oklahoma State University.

She got her start in roping at the age of six  because her family roped and competed in rodeos.

“We lived a western lifestyle, so I just grew up riding horses and I learned to rope at a young age,” Chace said.

Since that young age, she has earned six world titles and one state title.

She won two world titles in October of 2018 at the Womens Professional Rodeo Association Finals. She also won the Rope for the Crown championship in Las Vegas in December and qualified for the American in March.

Her state title came in 2007 while still in high school.

Chace said, “My parents have been my biggest mentors. They got me started on the right path and always gave me the opportunities that I needed to be able to succeed. They sacrificed a lot for my brothers and I to be able to compete and do what we love.”

She is the daughter of Tom and Lisa Chace, Cherokee. 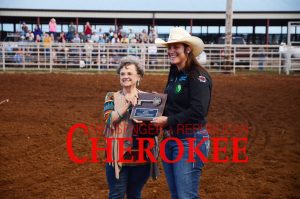