The Oklahoma Standard of neighbors helping each other in a time of crisis was evident last week when a group assembled to gather cattle for a neighbor and friend, Kelly Springer, who recently passed away.

Pickups, trailers, four-wheelers and other vehicles were used to round up the cattle over rough terrain east of Carmen. Friends and neighbors worked to get the cattle penned and trucked to the sale barn.

One neighbor expressed, “it’s an act of love for Kelly’s family. It’s something we can to do help them out.”

Kelly and his wife Cindy also raised donkeys. The four donkeys were re-homed to Bradt’s Menagerie west of Alva. The donkeys will be added to the animal collection at the agri-tourism site.

With so much uncertainty in the world, it’s nice to know folks in the small towns can count on neighbors being there for each other! 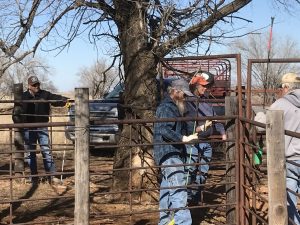