According to historical records, “the birth of Alfalfa County during the Constitutional Convention preceding statehood in 1907, presented an unplanned problem for the new county officers following the election naming Cherokee the new county seat.” Apparently, none of the three contesting cities for that designation (Carmen, Ingersoll and Cherokee) had offered any sort of courthouse facilities.

After three consecutive days of meetings, the new board of County Commissioners had a plan. For a combined charge of $80 per month, two rooms were rented from the First National Bank and four rooms from Winne State Bank, to serve as county offices. For an additional $15, a building which would be used as a district court room and court clerk office was rented from a Mr. Brown. In the absence of a county jail, prisoners were to be taken to the Woods County Jail until proper equipment could be obtained, after which the jail would be located on Washington Street, later becoming a warehouse for the electric company.

The rented rooms were used until 1909, when Cherokee’s new brick school building was erected,, and the old two story frame school was moved to the 300 block of Grand Avenue to serve as the new courthouse..

Records give conflicting reports about the purchase of the structure. Some sources say that the building was never purchased, merely leased from the school board during the ensuing years. A story from the then Cherokee Messenger states that the building was purchased by JC Covie for the amount of $900.00, while yet another article attributes the sale to JR McCrady, who was said to have paid $701.00. There has been speculation that “since McCrady was Sheriff, and maybe Mr, Covie couldn’t pay for it, McCrady got it through a sheriff’s sale,” purportedly in order to use the lumber for other projects in town,

In any case, the schoolhouse turned courthouse fulfilled that mission until 1922.

On June 10, 1919, the citizens of Alfalfa County voted to erect a new courthouse, which promised to be “a beautiful building which shows forth the large-mindedness and spirit of progress of the people of this country.”

The contract for the project was awarded to the Charles M. Dunning Company of Oklahoma City, their bid of $119,860 for a complete structure of stone being the lowest.

Work was officially begun on April 25,1921, when the plot was staked and marked, and, according to an account from The Cherokee Republican, “the first spade full of dirt was lifted from the ground Wednesday morning at ten minutes past eight, by TL Mitts of Cherokee, who has subcontracted the excavation work from the Dunning people. Thus was begun a piece of work which will eventually terminate in a beautiful modern courthouse for Cherokee and Alfalfa County.”

At this time, six train cars of machinery and material were already in transit to Cherokee, including two car loads of lumber, one of steel to reinforce the concrete, two car loads of concrete and one of machinery. The supplies came from various companies across the country and the machinery, which included a cement mixer, hoisting engine, several wheelbarrows and assorted tools, traveled from Wichita Falls, Texas, where the Dunning Company had just completed a large project.

The company sent a gentleman named PJ Timmer to supervise the work, but the entire working crew would consist of local men. At the beginning of the project, there were positions for about 30 workers, expectations were for that number to increase to 50 or 60 men within six to eight weeks, weather permitting.

Arrangements were made to obtain sand for the concrete from the river and creeks near Cherokee, providing more work for men with teams of horses when the time for hauling sand arrived.

As is common with many construction projects, Superintendent Timmer had his challenges. Harvest season took away many of his laborers that summer and he was hard pressed to find “sufficient men to carry on the work in the proper manner.” According to a statement made to The Cherokee Republican in June of 1921, Timmer noted that on the previous Friday, when he was having concrete poured, six of his men approached him,” in a body,” and demanded that they be paid six dollars a day for their labors. Mr. Timmer then said that he “gave the workers the right to leave their jobs,” adding that “since that time, very few men have applied for work.”

Undaunted, Timmer opted to use some of his carpenters in other positions, and expected to go ahead, “with very little delay.”

In September of 1921, the new building was dedicated by members of the local Masonic Lodge with the laying of the cornerstone. Henry S. Johnson, later governor of Oklahoma, delivered the address to what was, at that time, one of the largest crowds ever assembled in the area.

The Republican reported that each town in the county was “to have a man or woman present the data of that place to the official,” who would deposit the information in the stone, “accompanied by remarks, if desired.”

The resulting structure was to be a marvel of its time, “a modern building, handsome in design and finish and embodying the best thought for up-to-date buildings,” a ninety foot long, three story masterpiece (plus basement) of Bedford stone, quarried in Bedford, Indiana and recognized as the best building stone of the time. The hammered satin finish of the stone itself, along with the highly polished terrazzo floors and walls of Tennessee marble would make the new courthouse a landmark. It was considered to be a model of efficiency and organization and was highly touted as being fireproof throughout, ensuring the safety of valuable records, books and paperwork.

In March of 1922, the finished building was at last occupied by the county officers and became, according to newspaper accounts, “the object of admiration of every passing traveler, which will stand for years to come, as an object showing the spirit and progress of our county.”

Still today, as was noted back then, “the people take a just pride in this courthouse and have ever been grateful that it has been erected.”

(*Information for this article was obtained from the Alfalfa County History Book, The Cherokee Publishing Company, the writings of LR Smith, and Cherokee’s Early Years, compiled by Marthesia Meyers.)

A celebration is planned for 10 a.m., Friday, April 16 at the Alfalfa County Courthouse in Cherokee.

Punch and light refreshments will be served. 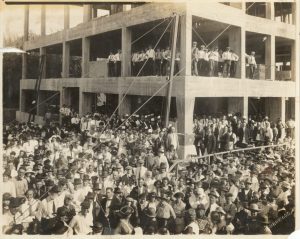