Coach Loyd Stout was recognized and honored during a groundbreaking ceremony for what will be called Lions Club Park and Loyd Stout Field.

The field is located just east of Alfalfa Electric Cooperative and has had history played upon the ground it sits on. It has featured many baseball, softball and even soccer games. From the youngest of players to those who played on a semi-pro baseball team, all have set foot on those grounds.

The Cherokee Lions Club decided to help bring the field back to working order, which included new fencing, leveling the field and more.

The park will feature the name of the Lions Club and will honor Coach Stout for everything he has done for the community of Cherokee.

The groundbreaking ceremony took place on May 23 with Stout throwing out a ceremonial first pitch to Jase Supernaw, a member of a coach pitch team in Cherokee.

Stout was born on a farm northwest of Lambert, to Harry and Lydia Stout.

Stout then enrolled in Northwestern State Teachers College in Alva.

During his time at college, WWII began and not long after, a fresh faced 20-year-old Lambert lad reported for duty to Sheepshead Bay, New York, for training.

Stout and his three older brothers, Willard, Noble and Fay, would be among the 16.1 million active servicemen during the war.

His reporting date to board ship was delayed due to a bout of tonsillitis.

After reporting to Sheepshead, Stout ran into A.B. Cochran from the Cherokee area. Despite their best efforts to stay together, the pair was separated late in November 1943, while boarding a ship in Baltimore, Maryland.

From Baltimore, Stout was deployed to Oran, Naples, Italy, Algiers and later Anzio. While at Naples, several servicemen aboard the ship developed head lice, and as a result, Stout and his other shipmates were put on a 10 day quarantine during Christmas.

While at Anzio, Stout had an encounter with an M.P. (military police) officer he recognized, Dave Gannon of Cherokee. Gannon told Stout that he had seen his brothers and knew the location of their rest camp.

After getting approval from his Colonel, Stout was able to stay the night with Noble and Fay as Willard had already been transferred elsewhere. It would be one of the last times Stout was able to see his brothers for the duration of the war.

He still vividly recalls that while going to the rest camp where his brothers were, he had to walk through streets covered with thick ash from the eruption of Mount Vesuvius.

While visiting his brothers, Stout was also reunited with Max Dixon from the Lambert area. The Stouts and Dixons use to swim together on a regular basis while at home, and decided to go for a swim in a pond they found outside of the rest camp.

Stout saw his first combat and had his first near death experience during the battle of Anzio. While aboard the ship Liberty, raids became a daily occurrence.

As best as he can recall, he and his shipmates had been raided about 75 times over a 10 day period. Then tragedy nearly struck for Stout. A German bomb was headed directly for the ship, before exploding less than 10 yards away.

The bomb, although it wasn’t a direct hit, caused significant damage. Water lines on the ship broke and the vessel began filling up with water quickly. Stout was transferred from the ship and onto a wooden mine sweeping boat.

While Stout was on the mine sweeper, a piece of shrapnel struck the boat and as a result the ship received numerous holes that necessitated emergency repairs.

The next morning Stout was able to return to his ship after temporary repairs were made to the water lines.

While pulling out of the area, Germans ramped up their attacks, resulting in a large loss of life to United States servicemen. While on guard duty, a gunner next to Stout was struck in the chest by shrapnel and had to be taken for immediate treatment. Despite his best efforts, Stout has never been able to track the soldier down to learn his fate.

Though he did not receive credit for it, Stout was able to shoot down a German plane while aboard a ship.

After the battle at Anzio, Stout’s ship returned to the states for repairs and he was able to take a week off and visit family.

After the break, Stout was deployed back to Naples and Southern France and was in Saipan for 34 days. His destination was set to be Iwo Jima.

Much to his relief, the mission to Iwo Jima never came to fruition and he again returned to the states.

In November 1944, Stout left Baltimore enroute to San Francisco. From there, he boarded the ship “Eagle Wing” and was destined for Tinian in June 1945.

Stout very clearly remembers one of the bombs they loaded on the ship was heavier and a lot larger than the other bombs.

On August 2, 1945, that bomb was off-loaded and placed onto an aircraft. Then four days later, Hiroshima and Nagasaki were hit with the atom bombs.

Although he has never been able to officially prove it, Stout does believe the larger bomb he saw being loaded, was in fact, one of the two atom bombs used in the attack.

A second ship, the “Indianapolis,” which left from the same port, was proven to be carrying one of the bombs, and like the “Eagle Wing,” its destination was  Tinian.

Unfortunately, the “Indianapolis” was sunk while leaving the area and going to the Philippines, resulting in the deaths of approximately 800 men. It is said anywhere from a few dozen to as many as 150 of the men died as the result of shark attacks.

After the war ended, Stout stayed in the service until 1946. He spent a large portion of the time on a ship running deliveries in South America.

Following his discharge from the service, Stout returned to Northwestern Oklahoma State University, where he played football for Earl Crowder (father of Stanley Crowder) while finishing up his teaching degree.

While at Northwestern, Stout played the one year of football, four years of baseball and five years of basketball.

He was able to play five years of basketball due to gas rations and there being no conference to play in.

After graduation, Stout took a job with the Byron-Driftwood school district, where he was employed for 17 years.

Stout was later employed by Cherokee Schools as girls’ basketball coach. Following a loss to Medford after having a 10 point lead going into the final quarter, he began experiencing chest pains and fast heart beat. Stout was taken to the hospital in Kiowa, Kansas, where his wife worked.

While Stout was hospitalized there with his second heart attack, the gym burned down in Cherokee. Stout subsequently retired and never coached another game following the Medford loss.

Besides coaching, Stout played on a semi-pro baseball team.

Prior to the war, the team was coached by a McCormick, who also ran the Conco Station. After the war Peanuts Brown managed the team.

That season, there were no more games and Stout got a team together to play in the Oklahoma Tournament for a chance to play in the national tournament.

Players who were on the team at college with Stout were called upon to play.

Stout remembers one game when his team was ahead and play was stopped. His team was told they had an ineligible player, who was the pitcher. The pitcher had played in Kansas so was not eligible to play Oklahoma league. If Stout’s team didn’t pull him they would have to forfeit, so the pitcher was pulled and Stout’s team eventually lost the ball game.

After that year, the team went six or seven years straight to the nationals. The best they finished in nationals was third place in 1959, which happened to be the year Oklahoma State University won nationals. They picked up some players from that winning team.

During his time on the team, Stout played left field and some center field.

Stout married Martha Coppock in 1955 and they had one son Mickey and two daughters Paula and Gayle.

All of their children were successful in sports.

Loyd was inducted in the NWOSU Sports Hall of Fame in 1993 and two years later, Paula was inducted. They were the first father and daughter to be inducted into the hall of fame.

After Stout retired from coaching in 1982, he proceeded to farm.

Stout still lives in Cherokee, in a home that was once adjacent to his parent’s residence. 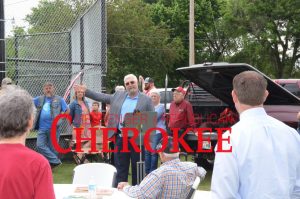 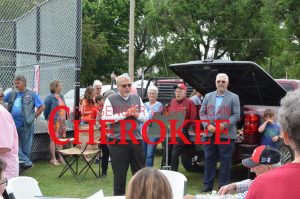 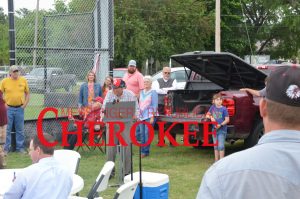 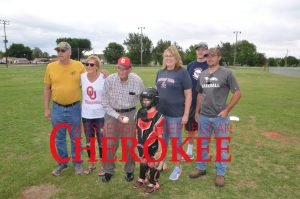 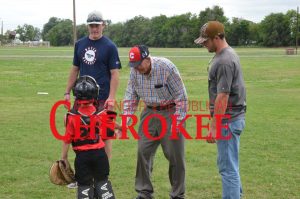 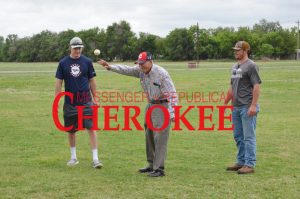 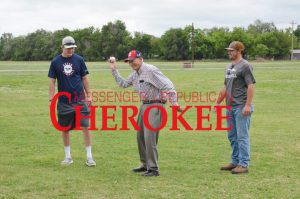 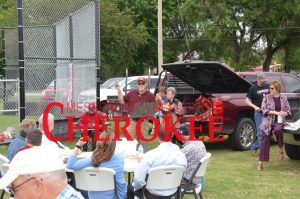 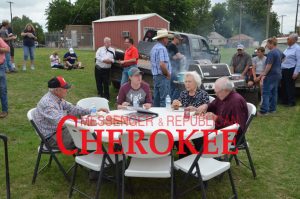 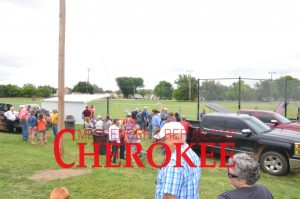