“This was a tough year,” Paris said, “One-Act was kind of up in the air for most of it. We voted early in the school year to move the contest to May in hopes of doing it in person. By Christmas, we knew the chances of doing it live were low, so we started looking at how to do a theatre contest online, and that’s ultimately what we did.”

The Chiefs submitted a video recording of their revival production of “Peter and the Starcatcher” on May 6 for the regional contest. After winning regionals, OSSAA then made the video available to the state judges, who then had several days to adjudicate the state submissions. In the end, the judges ranked Cherokee first, followed by Alva’s production of “Shipwrecked: an Entertainment,” in second place, and Okarche’s “Kindertransport” in third. A total of eight schools earned a spot at the state contest.

“In some ways, going virtual was great,” Paris said, “Traveling with a set and having to do the tech rehearsal the night before the show at the contest site can be really stressful, and we didn’t have to do that this year. But the online format added entirely new levels of pressure. You know, we’re trying to figure out the best way to film the show. Do you play it differently for the camera than for a live audience? There were a lot of considerations we don’t normally deal with.”

One consideration involved the production’s scene design. Because the virtual contest did not require traveling, the Chiefs decided to build a more permanent set than they normally would for the one-act play contests.

“That was actually really exciting,” Paris said, “We got to really do all the things we always want to do. We even painted the stage so it looked like wooden planks. We were able to be very specific with the lighting, which adds a whole other level to the experience. The fact that we didn’t have to break down and move the set really allowed us to use all the bells and whistles, and it turned out really beautifully.”

Peter and the Starcatcher, a prequel to Peter Pan, which earned the team its state title in 2017 as well, was the fourth play the team attempted this year, the others falling through for various reasons.

“We knew this year was going to be about flexibility,” Paris said, “And I’ve got to tell you, these kids really demonstrated grace under pressure. Because the circumstances around one-act kept changing this year, so did the show we thought we were doing. When we thought we might be able to do it in person, we were working on a really great show that I think we’ll do next year, assuming we’re back to normal. But when we knew we had to go virtual, it became clear that show wouldn’t work. It’s a broad comedy and really needs a live audience to fly. When we realized we needed to change shows, around Christmas, and that we’d be putting the play together on top of all the spring activities, we lost some cast members. So we switched to a smaller show. Halfway through that process, the licensing company revoked the performance rights because the playwright decided that show was no longer available for high school competitions. So we had a quick meeting where we discussed alternatives, and ultimately landed on Starcatcher. Honestly, I was a little hesitant. I always knew I’d come back to that show because it’s really special, but I didn’t think it would be this soon. But when someone mentioned it, the whole cast and crew lit up. It was the first time I had seem some of them excited about anything this year, so we went with it. And I couldn’t be happier with the outcome. And I don’t mean the competitive success. Watching these kids rise to the occasion on this was a real privilege. When we started work on it, I told them, ‘Look, the reason we did Starcatcher the first time was because we had the perfect cast, and you guys are not the perfect cast for this show.’ But then they turned themselves into the perfect cast for the show. The performances are all different from the originals, and it was just a delight to watch them step up.”

Paris’ pride in his students arose from the fact that moving from the play they’d been working on to Peter and the Starcatcher meant moving from a four-person cast to a ten-person cast, which meant most of the crew had to take on speaking roles.

“I’ll be honest,” Paris said, “that was terrifying. It usually takes a couple of years to get a kid ready for a major speaking role in a contest play, but we’re suddenly throwing in kids who I honestly never thought would have lines in a show. There are kids in this show doing incredible things that I swear I never heard speak before. It’s not that they hadn’t spoken to me, I just couldn’t hear or understand what they said. And suddenly, they’re playing these bigger-than-life characters on stage, way outside their comfort zone. It was amazing. They really came through, and each of them contributed to the win. So we went from a play with four actors and seven crew members to a play with ten actors and one crew member. And I have to give a special shout out to that guy. Kyson McDonald moved positions a lot, finally landing on lights, and I threw everything at him. He had around a hundred light cues to deal with, and he nailed it. One judge even mentioned how hard it is to have so many cues and make the lighting design seamless, but he did it. And of course, our five principal actors were outstanding. Chandler, Gabe, Noah, Jocie and Jade Jantzen truly hit levels of professionalism in their performances that are inspiring. You could see those kids play those roles anywhere. I’ve paid a lot of money to see actors be that good in professional productions.”

The Chiefs plan to present the state winning video along with Alva High School’s production in late July. The teams are currently working out the details, but Paris looks forward to the public presentation.

“Northwest Oklahoma has a lot to be proud of in terms of the arts,” Paris said, “We have the state champion and state runner-up plays within twenty miles of each other. Alva always does great work, and we’re excited about the chance to celebrate our kids together. We’ll be making some announcements about that soon.” 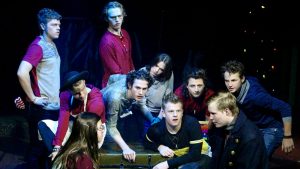