Braving the rainy morning, a crowd of approximately 100 gathered at the Cherokee Municipal Cemetery to honor and remember those who served and to decorate the graves of family and friends. Reverend Kyle Kiner of the First United Methodist Church opened this year’s ceremony with prayer.

This years speaker was Master Sergeant (Retired) Peter D. Stein. He is a graduate of Cherokee Schools and has strong family ties to Cherokee.

In case some readers were not able to attend this year’s ceremony or are interested in hearing Stein’s speech again, Cherokee Messenger and Republican would like to reprint it in its entirety.

I would like to take a moment to reminisce the history of Memorial Day and how it came about.

While the first commemorative Memorial Day events weren’t held in the United States until the late 19th century, the practice of honoring those who have fallen in battle dates back thousands of years. In Athens, public funerals for fallen soldiers were held after each battle, with the remains of the dead on display for public mourning before a funeral procession took them to their internment in the Kerameikos, one of the city’s most prestigious cemeteries. One of the first known public tributes to war dead was in 431 B.C., when the Athenian general and statesman Pericles delivered a funeral oration praising the sacrifice and valor of those killed in the Peloponnesian War—a speech that some have compared in tone to Abraham Lincoln’s Gettysburg Address.

In the spring of 1915, bright red flowers began poking through the battle-ravaged land across northern France and Flanders (nortnern Belgium). Canadian Lieutenant Colonel John McCrae, a surgeon, spotted a cluster of the poppies shortly after serving during the Battle of Ypres. The sight of the bright red flowers against the dreary backdrop of war, inspired McCrae to pen the poem, “In Flanders Field,” in which he gives voice to the soldiers who had been killed in battle and lay buried beneath the poppy-covered grounds. The poppy remains a symbol of remembrance to this day. And in the year 2000, the U.S. Congress passed legislation, where all Americans are encouraged to pause for a National Moment of Remembrance at 3 p.m. local time.

We have a handful of gold star veterans who gave the ultimate sacrifice to protect our constitutional freedoms and I would like to bring their memory to life today:

Though these are but a few who gave the ultimate sacrifice, let us not forget the nearly 400 veterans who lay beneath our feet. They too recited that same oath to lay down their life to support and defend our constitutional freedoms against all enemies, foreign and domestic.

I would be remiss to not mention a veteran who helped shape my life, though I didn’t know it at the time, instilling in me a sense of duty, honor and service to a cause bigger than myself. My grandfather, Edgar Lewis Newlin, who served on the S.S. Ticonderoga in Pearl Harbor as a crew chief. Though he didn’t say much, his stories were magical to me and planted a seed that later resulted in taking the oath myself!

I would like to close out with this final challenge. Folks, we are living in a modern era of 1776! There is no arguing the fact that history repeats itself. There is 1% of our nation who take the oath of enlistment or commission into the armed forces. However, you do not need to take the oath to be a patriot, to love your country and to defend your/our constitution. This fight will take more than 1%. So my challenge is this, do not let these gold star veterans sacrifices be in vain! We all have an inherent part to secure these freedoms for future generations. If at the very least, please share the stories of our ancestors with the next generation, you never know where a spark may ignite for that future flame!

Following Stein’s address, Mike Jones of American Legion, Post 33 in Cherokee placed and solemnly saluted a wreath in honor of all those who have fallen.

Taps was then played by Mike Cloyd, followed by a moving benediction by Kyle Kiner. 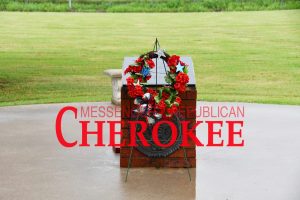 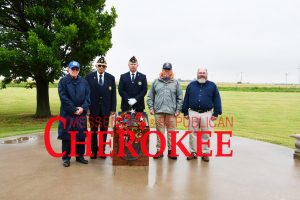 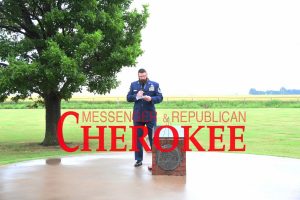 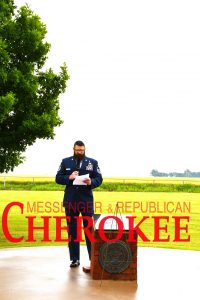 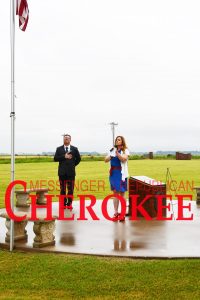 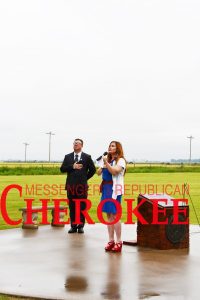 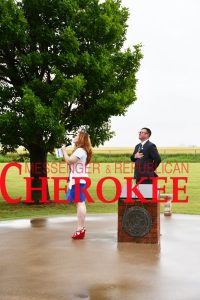