Kacey Ferguson,  Waynoka, Oklahoma was installed as the 2021 Oklahoma Funeral Directors Association President during the 118th OKFDA Convention and Expo on Monday, April 26, 2021.

The convention was held at the Tulsa Renaissance Hotel and Convention Center where funeral homes throughout six districts of Oklahoma’s 77 counties were represented.

Kacey is the second female president to preside over the Oklahoma Funeral Directors Association following in the footsteps of her grandmother, Irene Lanman.

Irene was the first female president serving as president in 1994.  So not only is this a personal achievement for Kacey there is historical significance as well for OKFDA.

Kacey’s journey began in the spring of 2011 when she became District III Chairperson.  Kacey’s next ten years were spent working her way through the OKFDA Board of Director positions while working as a funeral director in the family business at Lanman Funeral Home, Inc.  Kacey’s late grandfather, Kenny Lanman, Sr. purchased the first funeral home in Helena in August, 1975.  Still family owned with three generations plus support staff, Lanman Funeral Home, Inc. now has five locations serving families in Helena, Cherokee, Okeene, Medford and Kiowa, Kansas and surrounding areas.

In her acceptance speech Kacey said “I would like to thank my Grandmother Irene for being such an inspiration, mentor, and role model as well as the Oklahoma Funeral Directors Association.  I would also like to thank my family and friends for all their support and assistance along the way. 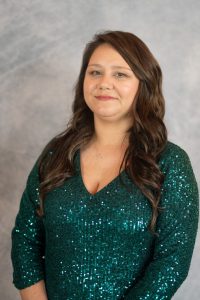