Joe Hadwiger of Cherokee, was honored as the 2021 Producer of the Year, a title sponsored by Livingston Machinery Company and supported by Manitou Group. As the winner of the prestigious award, Hadwiger received a new Manitou 840 telehandler with attachments for free for one year.

The Producer of the Year contest was created to recognize outstanding agricultural leaders with extensive history in the farming industry. After being nominated by his peers, undergoing a committee-selection process to identify the top three finalists, Hadwiger then conducted a video interview to share more about his farming operation. Videos of all finalists were posted online and voted on by the public to secure the title of 2021 Producer of the Year.

“I want to be able to pass along a productive and profitable farm to my grandchildren and children. I hope they’re as fortunate as I am and love their job, and that’s one of the things about farming is you have to love it,” said Hadwiger. Amongst family, friends and numerous community members, Joe was presented the new Manitou telescopic forklift by Livingston Machinery and Manitou Group representatives on May 17, 2021.

Beyond the use of the telehandler for the year, Hadwiger will be rewarded numerous benefits throughout his reign as Producer of the Year. From being featured in advertising campaigns to being prominent guests at exclusive events, the title will be honored in countless ways by both Livingston Machinery and Manitou Group. Additionally, Hadwiger will play an integral role in the 2022 awards process.

Headquartered in Chickasha, the equipment dealership, Livingston Machinery Company, launched the Producer of the Year and Custom Operator of the Year program to honor individuals, families and small ag businesses across the South-Central U.S. for their exceptional involvement in agriculture. Whether the nominee applied as a producer (a farmer/rancher working their own property) or a custom operator (someone who does custom work for others such as harvesting crops with their own machinery) each nominee was assessed on four qualifying categories to become one of three finalists in each of the two divisions: innovation, productivity, legacy, and community service.

To learn more about the program, nominate others for future awards or to view interviews such as Joe Hadwiger’s, visit www.LMChonorsAG.com. 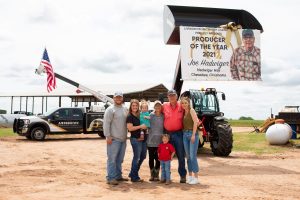