Something is missing these days from our favorite local supermarket. It’s not your preferred brand of soda or peanut butter. It’s not hand sanitizer or even toilet paper. What’s missing is the presence of a woman whose welcoming smile has greeted customers at United for over 30 years.

Judith Kildow grew up in Burlington where she “was raised on the wheat harvest.” “My dad had six John Deeres and five kids,” she reminisced, “so there was plenty of work to go around.”

Her family followed the harvest from the Texas border all the way to Canada. As soon as Judith was old enough to help (“maybe seven or eight-years-old,”) she joined her mother in keeping the crew well-fed and cared for as they made their annual trek northward. They cut for the same families every year, always enjoying the reunions with the other children they’d come to know along the way.

Judith eventually turned in her spatula for a driver’s license and drove a truck for the family business until she graduated from Burlington High School in 1961.

She soon married and lived in Kansas for a while before coming to Cherokee in 1962. “I really wasn’t excited about moving here at first,” she admitted. “You know, school rivalries and all that…” But she grew to love her new hometown, nonetheless.

Her first job in Cherokee was at Ted Rupe’s drugstore,where she worked part time in the snack bar serving malts, hamburgers, and such, including, as she recalled, “a barbecue beef sandwich that people really liked.” After that, she was a stay-at-home mom for a while, before getting back into the drugstore business when she went to work for John Austin. She continued her employment there under Bill and Joy Reed when they took over the establishment.

Judith’s career at United began on the second day of January in 1991. After three months, she began doing the weekend books with Betty Cutright. She worked the frozen food section for 16 years, then went on to take care of the tobacco products. When she became the main bookkeeper, she was working full time, running a register as well. She would often work 8 or 9 days in a row, and then get three days off.

She both opened and closed the store until the new addition was added, at which time she became the “front end manager,” working from seven in the morning until four in the afternoon.

“When I first started,” Judith recalled, “we had to memorize all of the “PLUs,” (a series of numbers assigned to each produce item.) “We had two weeks to learn the whole page, front and back, of numbers.” She gave credit to her husband Roger and friend Dolores Barrett, for her success. “They would quiz me every time we went somewhere,” she said with a chuckle. “They both could have gone to work at the store. By the time we finished, they knew it all as well as I did.”

“The kids today have cheat sheets at the register, “ the veteran checker noted. “They no longer have to memorize the whole list, And did you know,” she added, “those PLUs are the same every where you go, from New York to California, at every grocery store in the country. That way, you can go to work from one store to another and not have to learn them all over again.”

Judith’s favorite part of her job was “doing the books.” “But,” she said, “I really liked it all. It was a good job. There were so many wonderful kids, and I got to train them. I would tell them, ‘Some times it’s hard. No job is perfect and there are always going to be some things you don’t like. But you stick with it. You don’t give up. You can do it.’

“I loved the customers too,” she added. “Sharing their lives and seeing the kids grow up. And Scott was a great boss. He and Jason have been there for me the whole time.”

There were admittedly a few unusual happenings and unforgettable characters, but Judith’s most memorable moment at the store was probably the day that someone drove a car through the front window. “It didn’t come ALL the way in,” she said. “But it was sure something. And people were always running into those big poles in the parking lot.”

The hardest part of her long stint at the grocery store came just recently, when the business acquired new cash registers.“We’ve had three different kinds since I’ve been there,“ she explained, “and they’re always a learning experience. But these new ones are a whole different deal. Those touch screens… I would go through four different things before I got to where I needed to be.”

These days, though, she is right where she wants to be, at home, where she is busier than ever, keeping up with the great grandkids and getting ready for a visit from her youngest son and his family. Ray Dean and his wife have adopted two little boys, whom this grandma hasn’t even met yet, and she can’t wait. “I have a lot to catch up on,” she said, “but I am really going to enjoy my retirement.”

She will, however, miss those folks who have become a second family to her, saying, “I’ve been blessed to work with some of the best people.” Even those who just made deliveries over the years, like “the ice guy,” became part of her much loved tribe.

There’s no doubt that they will all miss this fine lady as well. “They all asked me,” she smiled. “‘What are we going to do without you?’ And I told them, you’ll just do what we have always done. Just hire another one!”

Judith has no doubt that those following in her footsteps will do a great job. After all, she has taught them well, and has left behind a legacy of loyalty, hard work, and an unmatched dedication to a job well done.

United won’t be the same without Judith, but we are thankful for her many years of friendship and service.

Happy retirement to our favorite lady in blue from all who love and appreciate her. 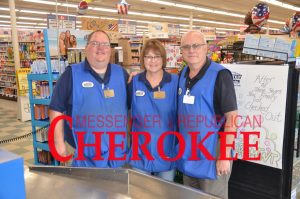