Larry and Brenda Miller will celebrate their 50th wedding anniversary on July 23, 2021.

Larry Don Miller and Brenda Anne Diel were married July 23, 1971, at the Cherokee First Baptist Church.  They lived in the Amorita area before moving to Cherokee in 2000.

Larry worked with his Dad, Buck Miller, for many years at Amorita Propane.  Larry was later the Heat and Air Foreman for AEC Services in Cherokee.  He worked there for 19 years before retiring in 2014.

Brenda ran the Burlington Café for a number of years. Brenda was later the Director of the Alfalfa County Emergency Medical Services for 20 years before retiring in 2012.

Larry and Brenda were both EMT’s and helped save countless lives in the Amorita and Cherokee communities.

Their children are Travis and Tammi Miller, and Shane and Stephanie Miller.

They have been blessed with three granddaughters: Taylor, Kaitlyn, and Taryn Miller.

The family is hosting an anniversary celebration at the Cherokee First Baptist Church on their 50th anniversary at 6 p.m. Please join us to wish them congratulations, with dinner and cake. 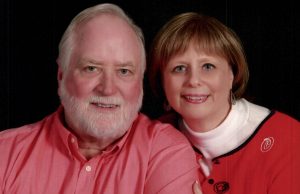