Cool and wet conditions pushed back much of the state’s hay season this summer, but with clear skies and hot temperatures in the forecast, producers are making hay while the sun shines.

Alfalfa, rye, Bermuda and other native prairie grasses are cut for winter livestock forage in Oklahoma, but some of those varieties, such as Bermuda, are 30-45 days behind normal harvest rates for this time of year. Brian Pugh, the northeast region agronomy specialist for Oklahoma State University Extension, said producers who hay Bermuda in his area are expected to be down one cutting by the end of the season.

“When you compare what we’re seeing to previous years, we have extremely cool temperatures at 2-inch soil depth,” he said. “With a lot of rainfall and cloud cover, we’re not getting solar radiation down to the ground.”

“Many producers just now are getting their first cutting hauled off the field. We should be on the second cutting by now, but we’re not seeing much of that,” he said.

The 2021 hay production outlook was concerning following a harsh winter that depleted many hay reserves. However, Pugh said late summer’s LaNina weather pattern should make up for a slow start.

“I’m optimistic that with the rainfall we received in July and the good hay conditions we have now, we might be able to catch up on annual production,” he said.

“When rain keeps producers from the fields, the alfalfa gets too far along for ideal cutting, which results in lower quality,” Seuhs said.

Alfalfa weevils, the forage’s predominant pest, peaked in mid-April amid a normal season for insects.

“We didn’t see a whole lot of aphid activity, although it depends on your area and conditions,” Seuhs said. “For those who did have them, they sprayed multiple times.”

He noted that results from the recent efficacy trials show weevils are building a resistance to insecticide products with the active ingredient Lambda-cyhalothrin.

“Ten years ago, we could achieve 90% weevil control in our field trials with Lambda products, but for the past three or four years, it’s down to 30% to 40%,” Seuhs said.

Alternative products with the same Insecticide Resistance Action Committee mode of action classification are available to producers. Seuhs said many of these insecticides have proven 100% control rates but are more expensive than the commonly used Lambda products. A lack of rotational options outside the group 3 pyrethroid class is still a concern. As farmers and ranchers proceed with hay harvest, the Oklahoma Department of Agriculture, Food, & Forestry encourages producers to remain mindful of the suggested protocols and regulations on transporting hay across state lines. Several quarantines have been issued across the country related to noxious weeds and pests, including counties within state borders that have been red-flagged due to fire ants. ODAFF has partnered with the North American Invasive Species Management Association to enforce specific guidelines producers must follow to receive NAISMA certification. The list of banned and approved plants varies with each state and requires close observation to prevent costly and time-consuming outbreaks.

“It’s an important program that raises our hay standards for shipping out of state,” said Kaci Hubbell, ODAFF nursery program manager. “Producers must fill out an application through our department and schedule an inspector visit within 10 days of the hay harvest date.”

ODAFF also is authorized to issue phytosanitary certificates that may be required by other states to certify hay is free of certain pests or diseases. Producers can access weed-free forage applications and other information on the ODAFF website, or contact Hubbell with questions at kaci.hubbell@ag.ok.gov or 405-522-5971. 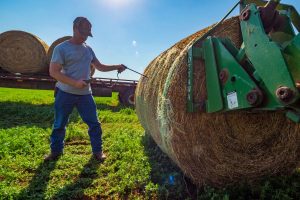