The Cherokee Development Authority and the City of Cherokee met at 6 p.m., Wednesday, Aug. 11.

The meeting was called to order with Chris Padilla, Terry Ryel and Adrienne Wessels present. Luke Hague and Mayor Kolby Arnold were absent.

The consent agenda was approved first which contained the claims lists. The minutes were removed and moved to the next item.

The minutes were tabled until the next meeting.

RSMeacham CPA’s were present to talk about the July 2021 financials.

Following the discussion on the financials, City Manager Mike Jones gave his report:

• The water leak on the highway near TH Rogers was discussed. The leak occurred several weeks ago and was repaired after it happened, but they had to tear up a lot more of the road to locate the leak. While working on the leak, they found a shiny spot in the dirt and had Department of Environmental Quality and Oklahoma Corporation Commission test it for petroleum and it was negative .

While this was done, they ran a new waterline in that area, then Wilson Construction filled in the spot to Oklahoma Department of Transportation standards and it will reopen soon.

• Due to the water leak, the new water rates were delayed. Saturday, Aug. 14, the new rates started and will be on the September billing cycle.

• Jones reminded that the city has a website, app on the phone and Facebook to update when water is being shut off.

• Crews are installing smaller meters for customers who have purchased downsized meters.

• The city is scheduled to loop the waterline at 11th and Ohio before the end of the month. This will occur prior to construction of road on Ohio Street.

Next, Cynthia Kozee was at the meeting to request for water rate adjustment for water usage associated with the sewer portion of her pool during the months of March through October.

Kozee told the council that the water wasn’t going back into the sewer, it was being used in her pool. She was just asking for a special rate for the sewer portion for people with pools. She was fine with paying for the water usage portion.

Jones told the council that they did away with the summer rates when they approved the new water rates.

After some more discussion, Wessels made a motion and Ryel seconded to forgive just her last sewer rate and have her Aug. 1 bill to be the average rate she uses. The motion passed.

After hearing no new business or remarks or inquiries from the governing body, the meeting adjourned at 6:32 p.m. with the next meeting set for Sept. 22.

The City of Cherokee meeting was immediately called to order.

The consent agenda was approved first with the only item being the claims list. The minutes from the July 14 and Aug. 4 meetings were removed and tabled until the next meeting.

Next, two resolutions were approved:

Next, RSMeacham CPA’s were present to talk about the July 2021 financials.

• The hydraulic motor went down on the skid steer. It was repaired with warranty covering it and is back in service. Alfalfa County District 2 assisted the City of Cherokee while the equipment was down.

• The crews are scheduled to begin digging out and filling holes with concrete prior to the end of the month.

• Crews are working hard to catch up with mowing after being set back with the water leak.

• The bids have opened for Ohio Street and the formal opening will be at 2 p.m., Aug. 25 at City Hall.

• The computers for City Hall and the police department were installed. The older computers were wiped and sent to the library.

• A report was given on the library.

•  The police department update was as follows:

– 36 reports being generated for 43 violations/incidents.

– On July 15-16 720 Interdiction Concealment course was held. The course consisted of instruction on the techniques used by drug traffickers in the transportation and concealment of illegal narcotics. Officer Tristan Hall completed this course, which was hosted by the police department. They also had approximately 15 officers from other agencies attend this course.

– July 23 Taser 7 certification. Officer Hall completed certification on the new Taser weapons now being used by the police department. This training was completed internally by Chief Ryan McNeil, who is a certified Taser instructor.

– July 23 CLEET Reserve Coordinator refresher. Officer Lloyd Cross attended and completed refresher training on reserve coordinator regulations and duties. This training was provided by CLEET at no cost to the City of Cherokee.

– July 27 Chemical Assisted Suicide. The police department conducted a training class to familiarize with recognizing and safe handling of chemical assisted suicide incidents. This class was also attended by one member of the Cherokee Fire Department. The class was instructed by Officer Cross.

Next, Gary Mast was at the meeting with his counsel Marcus Jungman to present a petition for declaration of residentiae to determine if the property falls within Cherokee City limits.

City of Cherokee Attorney Bryce Kennedy spoke to the council about the state statute showing what makes a property inside city limits. Part of that statute said that they can refer to a map that has been in circulation for at least five years. Kennedy showed the council a map from the Oklahoma Tax Commission which showed the property inside city limits.

After some more discussion by both parties, Wessels made a motion to grant the petition from Mast with Padilla seconding it. All three council members present approved the motion.

At the next meeting, the city will bring a deannexation so they can send it to Oklahoma City to get the map updated.

The final item of business was approving appointing Jones to serve on the board of directors for Opportunities, Inc.  – Community Action Partnership. The council approved appointing Jones.

The annual report was then presented by Chief McNeil.

After hearing no new business or remarks or inquiries from the governing body members, the meeting adjourned at 7:50 p.m. 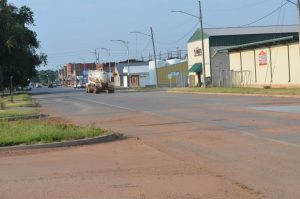 After being shut down several weeks due to a water leak, the road has reopened from Main Street north.