This year’s parade marshals for the Great Salt Plains Stampede Rodeo are Jim and Rozella Hadwiger, lifetime Cherokee residents and devoted rodeo supporters. The couple personifies all that is good about rural small town America, representing a kind of steadfast commitment to hard work and integrity that comes from their parents and grandparents before them.

The recipients of Cherokee’s Main Street Lifetime Achievement Award in 2020,the Hadwigers still make their home in the house where Jim was born nearly nine decades ago. From that day to this, both he and Rozella have been faithful to their roots in Oklahoma soil.

Jim remembers that he was just a boy, “probably about sixth grade,” he says, when he would ride his horse to town to watch the rodeo, which was held at that time in the area that is now the site of Loyd Stout Field. Never content to be just an onlooker, it was Jim’s habit, even as a boy, to lend a hand. He would do whatever he could to help get things ready for the event, and that practice would continue every year until he left for the army.

A proud graduate of Cherokee High School (“more than a few years ago,”) Jim was valedictorian of his class and manager of the boys’ basketball team. Then, even as now, he was known to be a hard working fellow who never wavered in his faith, nor in his love for family, community and country. Always the go-to guy when anyone needed a hand, Jim would never say “no” when something had to be done, just jumped right in with his signature grin and got down to business.

He found his soul mate and best friend in a beautiful girl who loved music as much as Jim loved a good story and the great outdoors. Rozella was a drummer in the band in her younger days, a position not held by many young women at that time, but she was also an excellent pianist and was a favorite accompanist for many vocal soloists. She was an accomplished debater on her high school team, a fact which would later astonish her own children, who thought their soft-spoken mother the least argumentative person around. She still managed to get her point across quite well.

During her high school years, her church offered to pay for lessons so that she could learn to play the organ. Learn she did, and played beautifully for the church services in return.

In 1951, she used her talents to provide music for the commencement exercises for that year’s graduating class, which included her future husband. She would to continue to accompany a whole generation of graduates, the last of which was the class of 1980.

Jim continued to help with the rodeo each year. “I built a lot of fence, ” he recalls. All of the corrals and arena had to be set up beforehand and taken down afterwards. “I cleaned corrals, drove a tractor, just did anything that needed to be done.”

He and Rozella were married in the United Methodist Church in 1954 and spent the early part of their marriage in Virginia Beach, where Jim was stationed in the US Army. After his honorable discharge, the couple moved to Stillwater, where Jim completed his degree in agriculture at Oklahoma A&M.

After graduation, the Hadwigers returned to the farm and the life they both loved. In addition to helping with the farming and ranching operations and raising their two children, Roxanne and Mickey, Rozella worked as a medical clinic receptionist, sharing her kind and compassionate nature with staff and patients for 12 years.

Jim is a lifelong member of Cherokee’s First Christian Church, where Rozella joined him after their marriage. He is an elder emeritus, having served the congregation in many capacities over the years, including deacon, elder, Sunday School teacher, vice president and president of the church board, and as a member of numerous committees. Rozella, too, brought her grace and talents to the church, serving on various committees and employing her musical gifts as choir director, organist and pianist.

After the couple’s return to Cherokee, Jim resumed his duties as all-around handyman and helper to the rodeo crew. He and Rozella have been “big fans” and faithful supporters through the years, watching the smallest goat chasers and youngest stick horse wranglers grow into champion ropers and riders.

Although son Mickey’s interests lay in different directions as he grew up, the family still treasures a photograph of him as “a little bitty guy” sound asleep in the saddle as he sits on a horse with his favorite cowboy.

Daughter Roxanne was a member of the “Western Belles,” a finely trained group of local young ladies aged 13 to 19, who performed in a sort of equestrian drill team sometimes referred to as “dancing on horseback.” Her parents accompanied the girls to performances at rodeos all across northwest Oklahoma and nearby Kansas. Jim noted that one year, the team was really excited to be scheduled to go to Colorado. Something happened and the group was unable to make the trip. Even now, he remembers their disappointment.

He also reminisced about his special friend Don Provost, and “watching that guy wrestle steers,” adding, “He sure liked his horses. I loved that man.”

Along with supporting and promoting the rodeo, Rozella and Jim have been active in Farm Bureau at the local, state and national levels. Jim served as director for nine years and received the distinguished service award after 60 years as a member. The women’s division kept Rozella busy as well, and she helped create many Alfalfa County scrapbooks that would go on to compete at state level. In addition, she was a home extension member and served on the Pioneer Spirit and Election Boards.

Jim was on the Cherokee School Board, serving as president of that organization for some time, as well as being a member of the Farmer’s Home Administration Committee. He continues to be active in the Cherokee chapter of the American Legion.

The Hadwigers are the proud grandparents of eight grandchildren and six great-grandchildren, all of whom are expected to carry on the traditional values of faith, family, community and country. No doubt this year’s parade marshals will continue to instill in the younger generations the same virtues of courage, perseverance, hard work and honor. Throw in a little fun and fellowship, and that’s what rodeo is all about.

As Jim says, “There is always something that needs to be done. You just do it.” 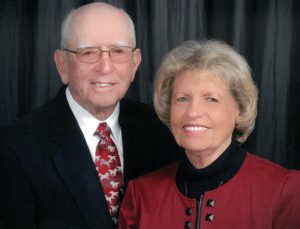