The idea to take on a construction project began in 2016 with then Pastor Garry McNeill and some members of the church.

In early 2017 the church voted to move in the direction of possible building or remodeling.

Later, in October, the church voted to put together an expansion feasibility committee that consisted of seven church members and the pastor.

A few months into 2018 in March, the church decided to hire an architecture firm and then later hired MA+ Architects.

Almost two years later the church voted to go out on bids after selecting the plans that they felt best suited the church.

That occurred in June 2020. With Covid-19 going on, the bids were delayed and in April 2021 the church voted to accept the contract with Enid-based firm Henson Construction.

The project has two parts. The first part includes new construction of:

• New office suite along 7th Street on the south side of the current fellowship hall.

• Elevator on the south end of the main building.

• Stairwell on the north end of the main building.

The second part is remodel:

• Moving the sound area to the first floor.

According to Pastor Bryan Laramore, “The idea is to make areas more functional to do what the church is called to do in the Great Commission.”

The construction, from the planning to the actual building stage, has had some snags due to the cost of construction and Covid-19, but Laramore gives credit to God for leading the church through the snags.

The construction is set to take 510 calendar days.

“The FBC Mission is to love God, connect people, serve others and grow the Kingdom, and this remodel and new construction helps us do that,” Laramore said. 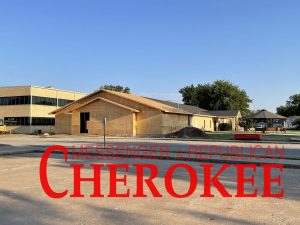