The Miss Timberlake Pageant was held at 7 p.m., Sept. 1 in the High School Auditorium.

McDonald performed a vocal solo to “Stay,” by Sugarland, while Watkins performed a tap dance to “Get Rhythm” by Johnny Cash.

Watkins was crowned as the 2021 Miss Timberlake, by Summer Finney, last year’s winner. Watkins received a tiara and a bouquet of roses donated by Cherokee Floral.

Watkins will be competing in the Miss Cinderella Pageant October 7-9 at Northwestern Oklahoma State University.

The Miss Timberlake Pageant is sponsored by the Timberlake Student Council. 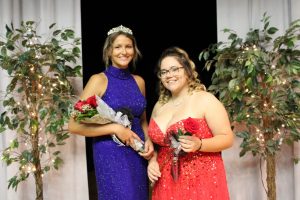