Two firefighters from the Jet Fire Department helped honor the lives of the fire fighters who gave their lives to help rescue those in the buildings by participating in a 9/11 Memorial Stair Climb.

Firefighters from Engine 5 and Engine 2 were dispatched at 8:46 a.m. (the time the initial dispatch of FDNY units occurred) to the Bank of Albuquerque Building in downtown Albuquerque. The building is 22 stories tall and it was climbed 5 times.

An Oklahoma firefighter participated in the 2011 Dallas Stair Climb and decided to bring it to Oklahoma City.

This year the climb took place on Saturday, Sept. 11 at the Moses F. Miller Stadium in Oklahoma City.

The number 343 is significant because it represents the number of firefighters killed. Sixty-one law enforcement officers and eight emergency medical technicians and paramedics were also killed in the attacks.

The purpose was to remember those lost and to commit to “Never Forget.”

Castle gave a summary of the event.

Castle is in his seventh year of taking part in this event and he said the following about this year’s climb, “Many people are scared to do it because they think they have to be in great shape to do it. It is not a race and it can take as long as you need. The committee does a great job of having great keynote speakers. They really set the tone for why we are here and doing this in honor of the 343 fire fighters and 61 law enforcement officers. These 404 ran into the world trade centers to help, not knowing it would be their last call.”

Reinhart participated for the first time and had this to say about the event, “Hundreds of firefighters and law enforcement officers were present for this event and even though you didn’t know them personally you felt you’ve known them forever. Everyone was there for a purpose. Overall it was an emotional experience from the opening ceremony with guest speaker, prayer, national anthem and bagpipes to the climb. Everybody was supporting each other to get through the climb.“

Everybody who participates in the climb receives a name badge for the person in whose honor they are climbing.

This year Castle had Firefighter Thomas A. Casoria, Engine 22.

Casoria waited almost five years, after taking his exam, to be called to his job at the fire department. After almost three years on the job he was with Engine 22 on East 85th Street.

He was last heard from, according to his father, Carlo, when he radioed his captain to say he and two other firefighters were helping a paraplegic down the stairs from the fifth floor of 1 World Trade Center and, a little later, when he radioed that a fireman was down.

Casoria, 29, grew up in Whitestone, Queens. At Holy Cross High School in Flushing, Queens, he played second base and was captain of his baseball team and was an all-city football player.

Once in the fire department, he switched to softball and played second base on the department team. He “made plays they can’t believe he made,” His father said.

Thomas’ brother, Carlo, who is also a firefighter, was in the same class at the academy.

With his firefighting career underway, Thomas had time to think of his future and make his mother, Judy, happy. He was engaged on Oct. 22 a year prior to the attacks and was set to be married on Oct. 13.

One night at a club in Staten Island, two young men approached two young women. They paired off and chatted for a few minutes, until one of the men whispered that he wanted to switch partners. So they did. And that is how O’Keefe met his wife Ginny.

Never loud or aggressive, Captain O’Keefe was nevertheless assertive. (He was the one who wanted to switch partners.) He had a quiet way that served him well as a firefighter, and later, as an officer.

“He wasn’t a blowhard,” Mrs. O’Keefe said. “He was never boastful. He was a gentleman.”

The only thing Captain O’Keefe, 48, and in the best shape of his life, liked more than running was watching his daughters, Tara, 20, and Kaitlin, 17, compete at track meets. With his flexible schedule, he spent many days cheering them on.

“He was proud of that. No regrets,” Mrs. O’Keefe said. “He was a great father and a great husband. He was the best.” 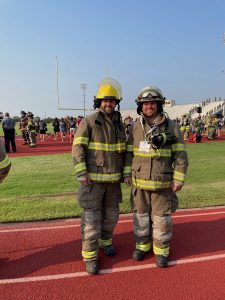