Summer Finney, daughter of Shelby and Mindy Finney was crowned the new Miss Timberlake on October 8, 2020.

Summer performed a tap dance to “Saturday Night’s Alright”.  The second contestant, Lindsay Olson, performed a vocal solo, “When She Loved Me”, from the movie Toy Story 2. Lindsay is the daughter of  Jace and Donna Olson.

Other entertainment was provided by Stephan Harwell and Robert Stuart, students at Timberlake.   Judges for the afternoon were Donna Robison, Beth Acre, and Anita Jordan.

Summer will represent Timberlake School in the Miss Cinderella Pageant at NWOSU during their pending homecoming festivities. 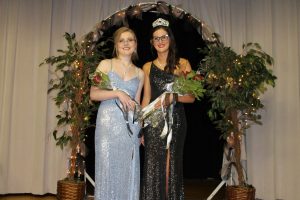