The Cherokee High School (CHS) speech and debate team placed third overall at the 2021 OSSAA State Speech and Debate Championship Tournament, held virtually this year as a result of the Covid-19 pandemic.

“It’s been a strange year all around,” CHS speech and debate coach Jason Paris said, “and it certainly impacted our activity. Instead of traveling to OU like normal, and competing in front of your opponents and judges, the kids recorded all the performances and uploaded the videos, then linked them to a website the judges could access from their living rooms. In some ways, it made life easier, and it definitely lessened our expenses. It’s also nice because it’s allowed alumni who live far away to judge contests this year. Avery Bagenstos, who graduated in 2016, judged regionals and state from California, and Cody Stinnett, my first All-Stater, judged state from Illinois. I don’t remember when Cody graduated. It was before we started keeping records. I think I must have been around ten years old at the time. Our regular judges, who are incredible, judged from their bedrooms, mostly, I think. But even though that has been a neat aspect of the virtual contests, I do really hope we never have to do it again.”

Despite the virtual format, the Chiefs came home with some impressive awards. In addition to the overall third place finish behind Riverfield County Day School and Haskell High School, CHS juniors Chandler Colvin and Gabe Wyatt earned the top spot in their event, dramatic duet, while sophomore Jocie Shelton won prose interpretation. Wyatt also took third place in humorous interpretation. Senior Noah Leslie came home with a state runner-up medal in original oratory, as well as a state finalist medal in monologue. Also competing at the state contest were juniors Draven Lehr in poetry interpretation, Gracie Leslie in humorous interpretation, and Raylen Weve in original oratory. Earning a state title in an individual event earns students the right to an All-State jacket, as they are considered the top competitor in their event in the state. This year, the Chiefs add Colvin and Shelton to their list of All-State recipients, while Wyatt adds a third All-State patch to his jacket.

“These kids really amaze me,” Paris said, “They’re juggling so much right now. We’re used to speech being in the spring, but this year, we moved the one-act play competition to May in hopes of doing it in person. So on top of an already jam-packed semester, these kids have been getting the one-act ready as well. It’s been a lot, frankly, but the kids are doing it with a lot of grace and good humor, and I think we’ll end up having a successful school year despite all these things going on outside of our control around.”

The regional and state one-act play contests will occur virtually on May 11 and May 18, respectively. 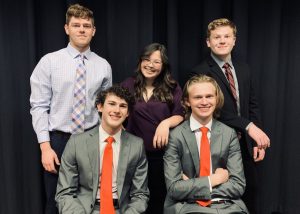