Four Aline-Cleo High School students were privileged this year to be a part of the Computer Science course taught by math teacher,  Shawna Clepper.

One of the games produced by Elizabeth Wallace and Samuel Moran won first place in the TSA State Game Design and will be competing in the Nationals.  The class recently produced a virtual reality, interactive tour of Aline-Cleo High School.

Together, the group created a class sweatshirt that included all of the characters they created in their apps and games.

The characters on the sweatshirt include:   Fuzzy Wuzzy, a radioactive teddy bear; Baguette, the fish with legs; Baguette’s Grave; Rudy Rubix; Professor Huzlenut, the defender against the Pistasium; the Personality Bug who won’t leave you until you watch twenty-four hours of anime; Bovine Geometry; She-rice, Adorice, Gracerice, and Catric. 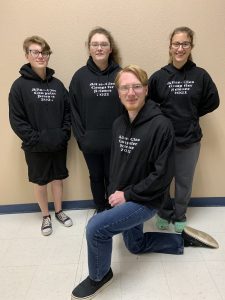