Aline-Cleo High School and Middle School TSA Chapter competed for the first time in the State TSA Competition.  Both groups participated in the Video Game Design; both groups got first place for the event and get to participate in the nation-wide competition at the end of June.  The high school group consisted of Samuel Moran, Elizabeth Wallace, and Cameron Ryel.  The middle school group consisted of Christopher Chandler and Jacob Cook.

For the Video Game Design, each group made every character, object and background by hand.  They had to follow the yearly theme, which this year was an adventure game.  Each team also had to completely code the entire game from scratch.

The responsibilities of the game were spread out among the participating members.  For the high school, Elizabeth made most of the graphics, Samuel coded and debugged for the game, Cameron did game testing, and all helped with the storyboard.  For the middle school, Christopher was in charge of graphics and coding, while Jacob did the storyboard and game testing.

Congratulations to the Aline-Cleo TSA Chapter for winning first in state for both events, and good luck at the National Conference. 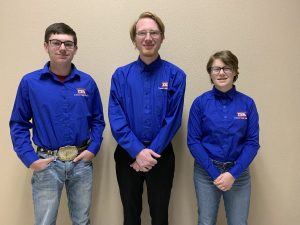 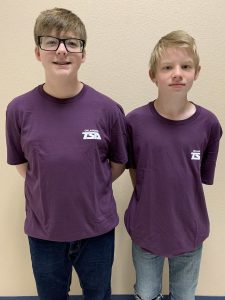