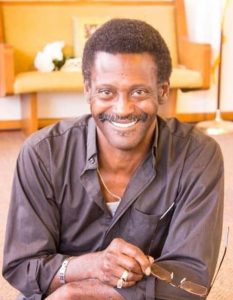 Edward Earl Jones Jr., 56, departed this life on May 26, 2019, in Cherokee. Ed was born on November 1, 1962, to Eleanor (Greene) Stevenson and the late Edward Jones. Ed attended Guthrie Public Schools and graduated in 1980. Shortly after high school Ed enlisted in the Army and served for three years in Korea.

Music played an important role in Ed’s life. He started playing music at a young age with his Aunt Jackie and cousins. Later, he sang with the group P.I.E. (Poppa, Iffy, and Ed). Ed used his gift of music to enrich his ministry. Ed was best known for his unbelievable vocals. He sang like an angel. Ed could sing and play the piano like no one Cherokee had ever seen. He was always willing to lend his talents for weddings and funerals.

Ed began his ministry in Okeene. He then came to Cherokee to work with the youth at the United Methodist Church. Ed came up with a unique idea, called “Human Videos” in which he and the youth recorded scenes and then traveled to area churches to bring the messages of God though acting, movement, preaching and singing. Ed continued his ministry at the First Christian Church, and finally he served as Pastor of the Bethel Baptist Church. In his spare time, Ed was employed at Alfalfa Electric Cooperative.

Ed had a great passion for food, eating and cooking. Ed made his home in Cherokee and at the time of his death was a loved member of the community.

Ed was preceded in death by his father; his Aunt Jackie, whom he adored, and several of his youth group members whom he loved dearly.

Ed is survived by his mother, Eleanor Stevenson and his step-father, William Stevenson of Guthrie; brother, Edward Q. Jones of Cherokee, eleven brothers and sisters; his church family at the Bethel Baptist Church and many other dear relatives and friends.

Funeral service was at 10 a.m., Thursday, May 30, 2019 at Cherokee First Christian Church. Arrangements were by Lanman Funeral Home, Inc. of Cherokee. Viewing was from 10 a.m. until 7 p.m. Wednesday at the funeral home. www.lanmanmemorials.com Facebook: Lanman Funeral Home Inc.

Memorial contributions can be made to the Lanman Funeral Home on behalf of the family.