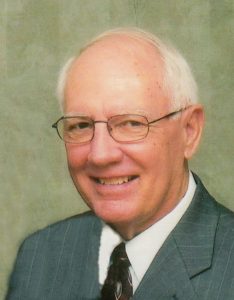 He was born on February 27, 1933 in Burlington, the son of Leonard Eugene and Inez (Cook) Marsh. When Marvin was 13 years old, his father passed away and his mother later married Hughes Hottel.  Marvin married the love of his life, Doris E. Kraft, on August 23, 1953 in Burlington. Their marriage was blessed with four children: Deb, David, Terri, and Mike.

Marvin is survived by: his wife of 65 years, Doris of the home; daughter Deb McCune and her husband Tim of Newport Beach, California; daughter Terri Maybee and her husband, Michael of Manhattan, Kansas; son Mike Marsh and his wife Tara of Manhattan, Kansas; as well as seven grandchildren and five great-grandchildren who knew him affectionately as “Bubba.”  He was preceded in death by his parents, his step-father, his brother Billy Marsh, and his infant son David.

Marvin began his military service March 16, 1954, with the Army National Guard of Oklahoma, and entered active duty with the United States Army on January 31, 1955, and was honorably discharged on December 19, 1956 at the rank of SP2 in Artillery.

In February of 1958, Marvin began his career in Dodge City, Kansas at the Junior High School as a teacher and coach. Later he moved to Dodge City High School where he served as a teacher, coach, and administrator. He remained there until 1970 when he became the Principal of La Junta High School in La Junta, Colorado.

Marvin and his family moved to Manhattan, Kansas in 1971 where he was the Principal of Manhattan Junior High/Middle School until his retirement in 1995.

In recognition of his contributions to education, Marvin was honored with the M.A.E.O.P. – Administrator of the Year in 1987, and the Kamelot Award in 1994 “for his outstanding contributions to middle level education in Kansas”.

After retirement, Marvin continued providing leadership to his community by serving on many local boards including, the Red Cross, United Way of Manhattan, the Manhattan Public Library Trustees, and the Riley County Retirement Center.

A Celebration of Life Service will be at 1 p.m.. Friday, June 28, 2019 at the First United Methodist Church, 612 Poyntz Avenue, Manhattan, Kansas with Rev. Ben Duerfeldt officiating. Private inurnment will be at a later date.

Memorial contributions may be made to the Manhattan Public Library, the Manhattan-Ogden Public Schools Foundation, or to the Good Shepherd Hospice House. All contributions should be sent in care of the Yorgensen-Meloan-Londeen Funeral Home, 1616 Poyntz Avenue, Manhattan, Kansas 66502.

Online condolences may be left for the family through the funeral home website at: www.ymlfuneralhome.com.