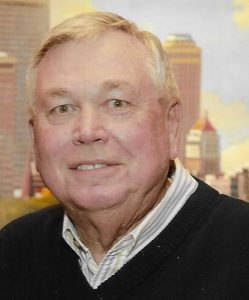 Mike grew up in Cherokee, graduating from Cherokee High School in 1964. He went to Northwestern State College for two years before attending Oklahoma State University and graduating in May of 1968 with a Bachelor of Science Degree in Accounting. Mike earned his CPA in 1976.

In January 1968 Mike married Karen Shaddox in Tulsa. After graduation they moved from Stillwater to Oklahoma City so he could begin his job at Cities Service Gas Company in their management trainee program. In June of 1974 they moved to Tulsa to work at Cities Service Company. In September of 1983 he moved to CITGO Petroleum Corporation. Mike retired as the Controller from CITGO Petroleum in April 2001.

In his retirement Mike enjoyed volunteering at Habitat For Humanity, building houses and serving on the Board. In December of 2010 he purchased property in Depew, which he later named the “Cross over B Ranch.” The ranch took him back to his agricultural roots and he enjoyed working in the hay field and raising a few cattle.

Mike received Christ as his Savior as a child and served Him in various churches throughout his life. He was a deacon, a Sunday School teacher, a cook, financial advisor, Royal Ambassador leader, choir member, and mentor. After Mike retired, his study of the Bible and love of the Lord increased through Bible Study Fellowship, Precepts and on his own.

He is survived by his mother, Treva Bright, Cherokee; wife, Karen; daughter, Laura Robertson and husband Britt, Bartlesville; son, Matt Bright and wife Keri, Ellicott City, MD; sister, Ann Seng and husband Charles, of Amelia, Ohio; and grandchildren, Ruth and Noah Bright and J.R. and Daniel Robertson, as well as numerous nieces and nephews, many other relatives and longtime friends.

He was preceded in death by his father, Richard Bright of Cherokee.  In lieu of flowers, memorials can be made to the Boys Ranch Town in Edmond, OK (www.obhc.org). Mike was passionate about the work done through this organization.