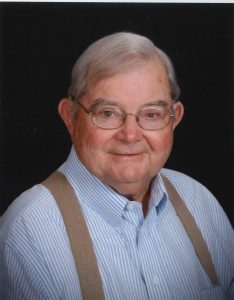 Benjamin Warren Hughes, son of Mildred Dale Hughes and Orval Hughes, was born on December 31, 1933 in Aline. He passed away with family by his side on July 6, 2019, at the age 85 years.

Ben graduated high school in Aline. After High School he attended Oklahoma A & M in Stillwater. Ben was a member of the Farm House fraternity, and also a member of the national meat judging team. Ben graduated with a double major, a bachelor of science in Agriculture Education and in Animal Science.

On August 15, 1953 in Helena, Ben married Jean Lavonne Fetzer. Following their marriage, they made their home in Okarche, where three children were added to their family: Dean, Cindy, and Doug.

Ben taught Vocational Agriculture at Okarche High School where he helped many of his FFA students succeed at stock shows and leadership development.

After teaching high school, Ben worked as a nutritionist for a feedlot in the panhandle of Oklahoma and later as a banker at Kingfisher Bank & Trust. In 1972 he returned to his hometown area of Carmen, where he enjoyed farming, ranching and building a family farming operation until his retirement. He was a member of the Carmen United Methodist Church.

Ben enjoyed fly fishing in South Fork, Colorado, where he and his wife spent the summers, racing thoroughbred horses, and spending time with his family.

He was preceded in death by his parents, and his sister, Betty Jean.

Memorials may be given to Oklahoma State University – Ben Hughes Family Scholarship or charity of donor’s choice through the funeral home.