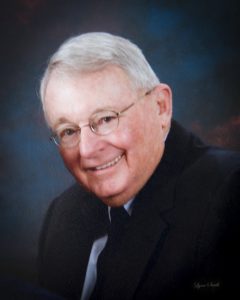 The Honorable David Paul Cullen, 87, of Cherokee, Oklahoma succumbed to complications from a fall and passed away on July 3, 2019.

Known simply as “the Judge” by family, friends and the community in which he lived, David Cullen was an avid hunter, history buff, reader and traveler.

He enjoyed making connections across cultures, the camaraderie of hunting with friends and family, and expanding his intellectual horizons through lifelong learning.

After serving in the United States Air Force, he graduated from the University of Oklahoma, married his college sweetheart, Naomi Joyce Hankey, and went on to get a Masters’ degree in Civil Engineering.

He pursued his Juris Doctorate from George Washington University Law School in Washington, D.C., graduating with honors while simultaneously working in the U.S. Patent Office, and later obtained his Masters’ degree in Judicial Studies while on the bench.

The Judge started his legal career as an attorney with Conoco, Inc., where he remained for over two decades before moving to oversee the legal department of Milestone Petroleum in Denver, Colorado, then returning to his wife’s childhood home of Cherokee, to go into private practice.

Judge Cullen was licensed to practice law in four states, and his court admissions included multiple state and federal courts and the Supreme Court of the United States.

Well known for his humor in his personal and professional life, he held the position of Associate District Judge until he retired, earning the respect of the community he served and the law enforcement personnel who worked with him as a fair and compassionate judge.

Not content to slow down upon leaving the bench, Judge Cullen acted as a mediator by appointment, cofounded the Alfalfa Major Woods Community Sentencing Planning Council and served as the Council’s review court judge for several years, and as Vice-Chair until his resignation in early 2019. He also continued to enjoy hunting, time with his family and traveling with his wife Naomi and friends.

A celebration of his life was held at 1:30 p.m., Tuesday, July 9, 2019 at the Cherokee High School Auditorium, 412 East 5th Street, Cherokee, Oklahoma 73728. Judge Cullen was laid to rest at Cherokee Cemetery. Arrangements were by Lanman Funeral Home, Inc. of Cherokee. Viewing was from 1-7 p.m., Monday. Friends could’ve visited with the family from 5:00 p.m. until 6:30 p.m. www.lanmanmemorials.com Facebook: Lanman Funeral Home Inc.

Memorial donations in lieu of flowers may be made to the Cherokee City Hall Flagpole Fund through the funeral home or to the American Kidney Fund, www.kidneyfund.org