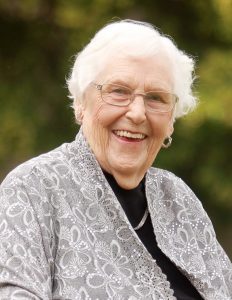 Evajoy Smith Elliott was born in Dacoma to Oliver Herbert Smith and Eva Henage Smith on December 4, 1925 and passed from this life on July 1, 2019.

Oliver and his three brothers had made “the run” for Oklahoma homestead land and eventually settled their families on the Cherokee Strip where Evajoy grew up. Evajoy married Thomas Harry Elliott on August 7, 1947 in Dacoma after both had attended Dacoma High School.

Upon leaving DHS, Thomas joined the United States Marines where he served from July, 1943 until February, 1946. During this time, Evajoy attended Anderson College in Anderson, Indiana where she graduated with a degree in psychology in June, 1947.

Both returned to Dacoma and they married that August. Thomas began his studies at Northwestern State Teachers College while Evajoy taught in Capron School. After Thomas completed his university studies, three children were born to the union of Thomas and Evajoy: Tomm, Kirk and Joy Lynn.

They moved to Greeley, Colorado where Thomas completed his Master’s Degree in Education, was hired by the Greeley Public Schools as an elementary principal and they concentrated on raising their family.  Once the children were old enough, Evajoy returned to work as a social worker for the welfare department in Greeley. She served as coordinator of the Head Start Program for several years before concentrating her work on the cases and needs of the welfare children.

Thomas and Evajoy attended Broadview Park Church in Greeley for many years and the Dacoma Church of God before moving there as well as upon their return to the Dacoma area during retirement.

They both loved traveling, which they demonstrated by making sure their children visited all of the states in the United States (except Hawaii) while they were still at home. Thomas and Evajoy went on to visit every continent in the world except Antartica. Upon retirement, they returned “home,” re-establishing themselves in Cherokee.

She is preceded in death by her parents; three brothers, Nelson Smith, Fred Smith and Elton Smith and two sisters, Irene Caldwell and Nina Ratzlaff.

Funeral service for Evajoy was at Dacoma Church of God at 10 a.m., Wednesday, July 10, 2019 with burial in Garrison Cemetery east and north of Dacoma. Arrangements are by Lanman Funeral Home, Inc. of Cherokee. There was a time of visitation with Evajoy’s family at the funeral home in Cherokee from 4-6 p.m., Tuesday. www.lanmanmemorials.com Facebook: Lanman Funeral Home Inc.

Memorials may be made to Dacoma Church of God through the funeral home.