Richard W. Davis was born June 5, 1928 in Jet to Bill Davis and LeNona (George) Davis and raised by his mother and his beloved step-father, Elgin Page.

After high school, he continued his athletic career playing football and track at Oklahoma A&M and later at Panhandle State University.

He was very proud that he was selected to play in the Oklahoma vs. Texas Oil Bowl Football game, as was his son, Kyle, and his grandson Judson.

Richard began his teaching and coaching career in Muskogee, then in Texhoma and Beaver.

He finished his master’s degree at the University of Oklahoma and began teaching at Altus Junior College in 1960, which later became Western Oklahoma State College. He taught history and government for 35 years before retiring in 1986.

A private family service will be held in Garden City, Kansas at Garnand Funeral Home Chapel.

Memorial donations may be made to Richard and Jane Davis Scholarship Fund at Western Oklahoma State College, Altus. 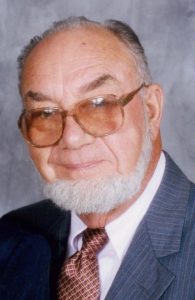