Born on January 17, 1936, to Vivian LaFaun and Charles Vernon Haunschild in Jet, Charles was the oldest of five children.

He married his high school sweetheart, Janice Hays, in 1959. Through their marriage that spanned 60 years, they raised three children: David, Chris, and Anne.

At a young age, Charles started working at his family’s pharmacy and mercantile, where he learned the value of hard work and to care for his neighbor. Afflicted with asthma and severe allergies as a child, he decided at age 12 that he wanted to be a doctor.

Following two years in the Air Force, he completed a three-year allergy fellowship at Baylor University in Houston, Texas.

Charles was a member of the Oklahoma Allergy and Asthma Clinic in Oklahoma City, where he worked for 40 years.

He was a quiet, compassionate, and Godly man who helped countless patients enjoy a better quality of life. Charles loved every aspect of caring for his patients and remained friends with many of his patients after retiring from medical practice.

Everyone who met Charles loved him. As a man of deep Christian faith, he treated everyone he met as a friend, sharing God’s love through his actions.

He was generous with his time and resources, always caring for others with words of encouragement, gadgets to make life “safer,” and a hand to help.

Charles adored his wife and children, delighting in spending time with them. He was devoted to his loving wife Janice, who through her boundless energy and love, helped Charles become the wonderful man everyone knew him to be.

When Anne was in fifth grade, Charles drove her to school every day, smiling as she chatted about friends, laughing as she sang along with the country songs, and soaking in the wisdom of God’s word on The Biola Hour and Focus on the Family radio shows.

He shared an affection for scouting, hunting, and fishing with David and Chris, attending campouts, making peach cobbler for Troop 168 at Scout-A-Rama, and adventuring the lakes of New Mexico. Charles would never turn down a homemade chocolate chip cookie or a Braum’s chocolate malt. Known for his very sharp and dry wit, he was always quick to banter with others and laugh at himself.

With friends and siblings, Charles planned and pulled off elaborate capers to tease those he loved most. His friends and family cherished his sense of humor.

Charles was preceded in death by his parents and his sister, Nedra Haunschild. 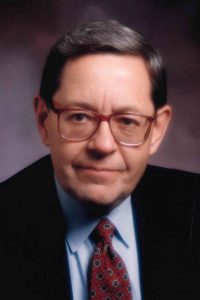