Leland E. Walborn was born July 7, 1940, the son of Earnest and Lillian Harmon Walborn, at Manchester and passed from this life on September 8, 2019 in Alva.

Leland and Margaret Cutright were married February 5, 1965 and they made their home in the Amorita-Byron area where they lived their fifty-four years together.

Leland was a cowboy who had a love for and was good with his horses.  He roped and doctored cattle for farmers and ranchers in the area and also owned and operated his cattle truck.  In 1967 he started working at Alfalfa County District I as a road grader operator and continued this job for thirty-three years, at which time he retired.  He had also served in the U. S. Army National Guard.

He is preceded in death by his parents, Earnest and Lillian Walborn and three brothers-in-law.

There will be a graveside service for Leland at 10 a.m., Friday, September 13, 2019 at Byron-Amorita Cemetery with arrangements by Lanman Funeral Home, Inc. of Cherokee.

Memorials may be made to Byron-Amorita Fire Department through the funeral home. 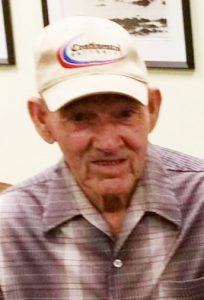