Jacob Charles Somerhalder, 96, of Burlington, passed away on December 12, 2019, with his beautiful wife of 68 years, Bonita, by his side.

Jacob was born on November 14, 1923, in Burlington, the third of seven children born to Elias and Mary Somerhalder. Jake attended Burlington schools and after graduation from high school served his country for three years in the South Pacific as a Marine. He was an amphibian tank driver who landed on the beach in the first waves to clear the shore for landing crafts of subsequent marines. He did this for all the major battles in the South Pacific, including Iwo Jima, for which the State of Oklahoma honored him with an Iwo license plate for his car.

Upon his return, he met Bonita Throckmorton of Capron, and they married on November 25, 1951. Jake farmed in eastern Colorado and was a custom harvester before joining the Burlington Cooperative Association in 1954. He spent 33 years with the Co-op, serving as manager the last 16 years.

Oklahoma State University honored him as their grain dealer of the year in 1986. He was an avid fisherman who said the best catch of his life was his wife, Bonnie. Among his many accomplishments was the fact that every one of his children, grandchildren and great-grandchildren caught a fish with him. Jake had a close family growing up and together, Jake and Bonnie carried on an enduring legacy of a strong marriage, faith in God, a cherished family and treasured friends. Jake enjoyed life, worked hard, and loved people.

Memorials in Jake’s honor may be made to Stamp Out Starvation through the funeral home. 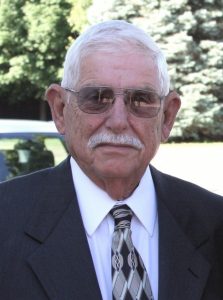