The Reverend Tom Stanley and the Reverend Don Johnson will officiate. A short reception followed the service at the Church.

Burial followed at 12 p.m. at Good Hope Cemetery near Helena.  Arrangements are by Lanman Funeral Home, Inc. of Helena.

Friday, December 27th a viewing was held at Helena, from 10 a.m. to 6 p.m. and family was present from 4 to 6 p.m.   www.lanmanmemorials.com  Facebook: Lanman Funeral Home Inc.

Fran grew up on family farms near Helena. (Fran’s nickname was “Butch” and friends and family from Helena still refer to her by that name.) She attended Green Plain, a one-room school, through 6th grade, then Helena Public Schools, graduating in 1955. She married Everett Wayne Galer of Helena, September 3, 1955. They lived briefly in Stillwater, then moved to Albuquerque, New Mexico, Oklahoma City, and finally settled in Enid.

Fran worked for Security National Bank in the 1960’s. In the 1970’s she went to college and received her BS of education degree from Phillips University. She continued her education later receiving a Masters in Reading and Special Education. She taught at Kremlin-Hillsdale School, and Longfellow Jr. High with Enid Public Schools. She took a break from education in the 1980’s to operate her family owned business, a local sports store, “The Cross Court Tennis and Ski Shop.”  After closing the store in the 1990’s she worked as a Special Education Teacher with Hennessey Public Schools until her retirement.

Fran loved the sport of tennis. She began playing in school, and she and Wayne played tournaments and were active in Enid Team Tennis organizations. She was an active supporter of her sons’ sports activities as well as her daughter’s and granddaughters’ music, dance, and theatre performances. After retirement, she and Wayne worked on family genealogy research, and traveled, frequently visiting family.

Fran was preceded in death by her husband, Everett Wayne Galer, Enid and her parents, Harvey and Kathryn Luscombe, Helena.

Memorials may be made to Old Paws Rescue Ranch or Central Christian Church through the funeral home. 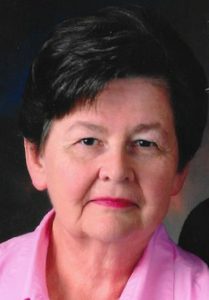