Funeral service for Doris Doll was at 1 p.m., Monday, February 3, 2020 at First Christian Church in Cherokee. Burial was in the Cherokee Municipal Cemetery with arrangements by Lanman Funeral Home, Inc. of Cherokee.

Viewing was held from 9-11 a.m., Monday, February 3, 2020 at the funeral home, then before the service at the church. www.lanmanmemorials.com Facebook: Lanman Funeral Home Inc.

Her family moved back to Oklahoma when she was three years old, where they lived on a farm northeast of Stillwater.

She received her education at Eureka Consolidated School and Oklahoma A&M College at Stillwater where she majored in Economics and minored in Secretarial Administration.

In 1946 she married Robert W. Owen of Cherokee. In 1948 they went into the farming business near Goodwell where they lived until 1953 when her husband became a District Manager for an insurance company in Oklahoma City. In 1962 they built and managed the bowling lanes in Perry.

Later she was a secretary, bookkeeper for a livestock farming business. When her children were in school, she was active in the PTA and Band Parents. She was Cub Scout Leader, Girl Scout leader, and taught in summer Bible school. She had been a bowling instructor for 32 years. Most of her time volunteering was with youth programs.

She was a Past Matron of the Order of the Eastern Star, a member of the First United Methodist Church, and the United Methodist Women. After she retired from work, she enjoyed time with family and great grandchildren.

She volunteered at the thrift store, was active in the church, and participated in the bowling league in Alva.

She is preceded in death by her mother and father, Theodore and Ellen Mahlo; one brother; one sister; first husband, Robert W. Owen; second husband, Robert O. Doll; her eldest son, Walter Owen, and only daughter, Kathleen Salcido.

Memorials may be made to the Cherokee First United Methodist Church through the funeral home. 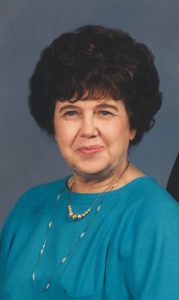