Shirley J. Holland age 86, passed away Monday, March 30, 2020. Memorial Services will be held at a later date. Shirley was born July 20, 1933, on her family farm in rural Byron, to Lanta and Wilma (Terry) McIntire.

She was the third generation of her family to live on the farm which was founded during the Cherokee Strip Land Run of 1893.

On June 1, 1955, she married Donnie Holland at Union Valley Church. In 2005, they returned there for a 50th wedding anniversary celebration.

She is survived by a son, Kevin (Jennifer) Holland, Clearwater, KS; and Buddy (Minnie) Terry, who she considered her brother.

Please see the Webb-Shinkle mortuary website for a full obit. 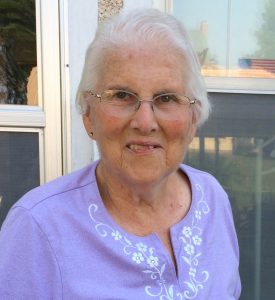