Delmar Lavarre Allen was born on June 22, 1928 on the family farm south of Byron to Orville and Ruth (Spry) Allen. He was the fifth of six children. He passed away at his son’s home in Cherokee surrounded by family on May 21, 2020 at the age of 91.

Delmar attended school at Byron and graduated in 1946. He joined the Army in 1946 and was in the 8th Cavalry Division, stationed in Tokyo, Japan in the occupational forces. He was honored to march before General Douglas McArthur.

Following his honorable discharge in 1948, he returned to Alfalfa County and helped with the family feed mill business in Burlington.

He later helped his father with custom harvesting in western Kansas where he met and married the “farmer’s daughter” Melva Kuhlmann. They were married on June 1, 1952 at Lydia, Kan. Following their marriage, they moved to Byron. Delmar spent almost all of his life farming in the Byron area.

He loved raising cattle and just recently sold his cow herd at the age of 91. He also loved brokering alfalfa all over the country, including the Kentucky Derby. He founded Allen Hay and was an active member of the National Hay Association. His love of the land was passed down to their four children- Janet, June, Bill and Roger.

Delmar also passed down a legacy of strong faith in God and his compassion for others in need. He was an active member of First Baptist Church and generously helped many people in need whenever possible.

He was preceded in death by his wife, Melva; three brothers and one great-grandchild. His family and friends will greatly miss his jolly personality and his infectious laughter.

Arrangements are by Lanman Funeral Home, Inc. of Cherokee. Visitation was from 5-8 p.m., Monday with the family present from 6-8 p.m. at the funeral home.

Public funeral service for Delmar was held at 2 p.m., Tuesday, May 26, 2020 at First Baptist Church in Cherokee. (The church and fellowship hall will be disinfected to follow Covid-19 protocol.) Following interment at the Byron-Amorita Cemetery, the family gathered to visit with friends at the Byron Fire Station.

The service was live streamed on First Baptist Church Cherokee’s Facebook page. It will also be available for later viewing at the same location.

In lieu of flowers, Delmar requested donations to be sent to   Stamp Out Starvation with Lanman Funeral Home as custodian. 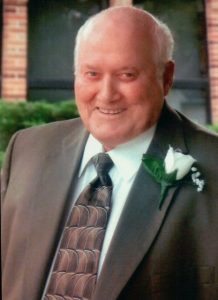