He graduated from Goltry High School in 1959. While attending school, Charlie was a star baseball and basketball player. He attended and graduated from Enid Business College in 1961.

He enlisted in the Army National Guard 45th Infantry in 1961 and was honorably discharged in 1967.

Charlie married Carol Ann Hutcheson in Jet on December 29, 1962. They made their home in Jet and have lived there for 57 years. To this union, four children were born: Kelvin Lynn, Anita Ann, Nicole Renee, and Derlin D. Charlie managed the Jet Farmers’ Co-op for many years. He then went to work for Alfalfa County District 2 and 3 road crew and retired from there. He was farming and raising cattle until the day he went to be with the Lord.

Charlie, along with Carol, is a member of the First Baptist Church in Nash, where he attended Sunday School and church. After his retirement, he enjoyed going to town and visiting with his lifelong friends. What he enjoyed most was watching his kids, grandkids and great grandkids excel in athletics and academics. While attending these sporting events, he took on the job as a “Premier Volunteer Sports Officiating Adviser.” Charlie never met a stranger and loved people and life.

He is preceded in death by his parents Lynn and Mabel and his brothers, Jerry and Ronnie.

Funeral service for Charlie will be  at 10 a.m., Thursday, July 16, 2020 at Nash Baptist Church. Burial will follow at Jet Pleasant View Cemetery with arrangements by Lanman Funeral Home, Inc. of Helena. Viewing was from 11 a.m. to 7 p.m. Wednesday with family present from 5:00 p.m. until 7:00 p.m.  www.lanmanmemorials.com  Facebook: Lanman Funeral Home Inc.

Memorials may be given to Nash Baptist Church or Timberlake Athletics through the funeral home. 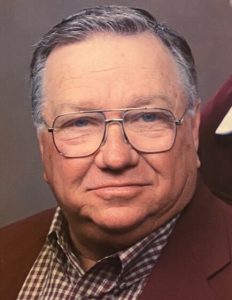